Fathi Al-Sayeh
Eng. Ahmed Samir: A major role for the Egyptian and Emirati private sector to enhance the economic and investment partnership between the two countries 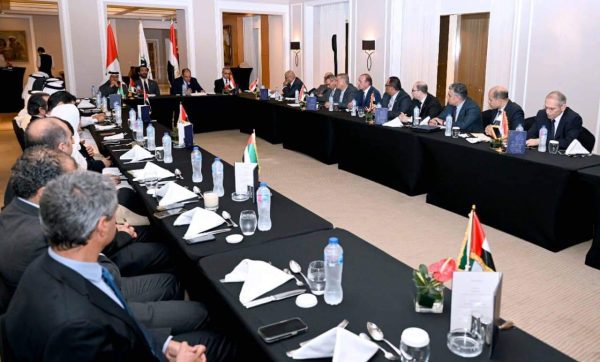 Engineering / Ahmed Samir Minister of Trade and Industry The Egyptian state aspires to increase the orientation of Emirati companies towards investment and work In Egypt, to take advantage of the investment-attractive climate and the system of incentives and distinctive facilities offered by the Egyptian government to investors in various productive and service sectors, in addition to the opportunities that this provides to benefit from the advantages of free trade agreements signed between Egypt and the countries of the world and various economic and regional groupings, especially the markets of Arab countries. And the countries of the African continent, which in general represent a promising market.

The Minister stressed the distinguished relations between the two brotherly countries based on deep understanding between Egypt and the United Arab Emirates, within the framework of brotherly relations and appreciation

Samir pointed out that the Egyptian-Emirati relations are characterized by brotherhood, friendship and joint support in all fields, and are considered a successful model to be followed in cooperation between brothers, based on equality and common interests. , at all levels of bilateral cooperation, noting that the two brotherly countries enjoy distinguished historical relations that were co-founded by the late Sheikh Zayed bin Sultan Al Nahyan, who believed in Egypt’s pivotal role and position in the region as a pillar of political and security stability in the Middle East, and the heart of the nation. The Arab Spring, while the Arab Republic of Egypt considers the United Arab Emirates the primary supporter of it and the Arab nation in general in various international forums. An exceptional night due to the impact of two successive global crises – the Corona pandemic since January 2022 and the Russian-Ukrainian crisis since last February – which cast a shadow on the current economic reality with unprecedented repercussions resulting in high inflation rates, The slowdown in the growth of the global economy, the decline in production rates and investment flows, the instability of global supply chains and the high levels of indebtedness, pointing out that strengthening cooperation and joint action is the only way to overcome adversity and crises and exploit the opportunities and grants they offer.

Samir pointed out that the endeavor to advance and develop economic relations between Egypt and the UAE is based on a well-established basis of distinguished political relations between the two countries, a trend that receives all support and support from the political leadership in the two brotherly countries, pointing to Egypt’s keenness to create an atmosphere of permanent communication with the Emirati brothers, which It would reach common formulas between the two countries that push for the permanent development of relations at all levels and levels, especially trade and investment relations.

The Minister pointed out that the UAE is the second largest partner Trade for Egypt in the Arab world, and the second largest investor with projects worth $7.8 billion as of May 2022, in various fields, including real estate development, tourism, industry, finance, communications, and information technology and agricultural investment.

Samir pointed out that the investment climate in Egypt has witnessed during the recent period many institutional reforms with the aim of facilitating and simplifying procedures for investors, which contributed to achieving positive results in the field of establishing companies from In terms of time, cost, and procedures for starting the activity, a package of legislation aimed at creating an attractive environment for local and foreign investment was enacted, including tax laws, investment, private sector participation in infrastructure projects, services, public utilities, and the new labor law, as well as Launching an additional package of incentives to invest in green economy projects in line with the state’s orientation in this regard. The Egyptian legal system provides protection and guarantees For the national and foreign investor.

Samir invited the Emirati business community to invest in the fields and sectors that offer promising investment opportunities in Egypt, which include real estate investment, infrastructure projects, especially water desalination projects, investment in securities, and investment In the field of agricultural reclamation (the one and a half million acres project), in addition to the investment opportunities available in the economic zone of the Suez Canal, as well as in the field of clean energy in Egypt, I welcome the participation of the Emirati side in the climate summit to be held in Sharm El-Sheikh in November 2022.