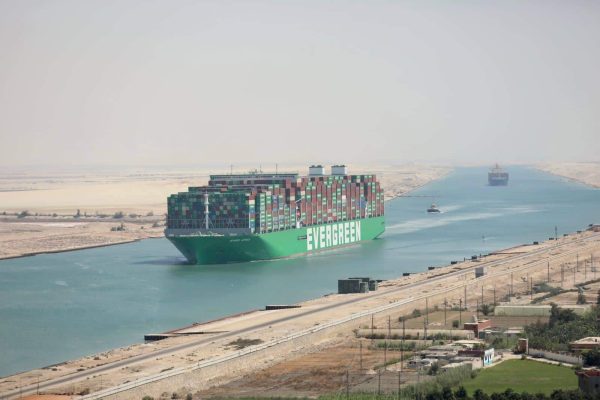 Lieutenant-General Osama Rabie, Chairman of the Canal Authority Suez, yesterday, Saturday, the navigation movement in the canal, which witnesses the transit of 65 a ship from both directions With a total net tonnage of 3.7 million tons.

The head of the authority was keen to follow up the progress of work during his presence at Marina Guides in Ismailia, and was reassured On the regularity of work in all sites related to the regulation of navigation, saluting the guides and the movement management men, praising the great effort made to maintain the channel’s leadership. And on Saturday, the shipping movement from the north topped the giant container ship EVER APEX with a total tonnage 248 of one thousand. The container ship COSCO SHIPPING SOLAR, which is flying the Hong Kong flag, came on top The convoy of the south with a total tonnage of 552 thousand tons on its next journey from Singapore to Greece.

The head of the authority stressed that the navigational reports in the canal reflect beyond any doubt the incorrectness of the voices that questioned the economic feasibility of the new Suez Canal project, which succeeded In achieving its objective of raising the efficiency of the canal by increasing its numerical and absorptive capacity and the consequent increase in the average daily transit of ships transiting the canal and raising the canal’s readiness to receive the current and future generations of giant ships with large submersibles, pointing out in this regard that the current month of October achieved the highest average daily transit By 112 a ship.

6%, and the total net tonnage amounted to

records 1847 $ 4 million (according to the calculations of the average daily return during the month ) compared to 552. 9 million dollars during the month of October last year, a difference of

It is worth noting, that the movement of Navigation in the canal had set new and unprecedented records during the current month in terms of daily transit statistics, achieving the highest daily transit rate and the largest daily net tonnage of transiting ships in the history of the canal, on Tuesday corresponding to

October where I crossed that day 65 A vessel from both directions without waiting, with a total net tonnage of 6.2 million tons, exceeding all previously recorded numbers.