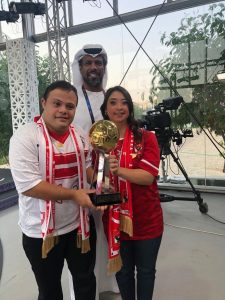 Saib Bank was keen on the participation of Egyptian football fans in the activities of the Saib Super Cup match The Egyptian, which was held last Friday Corresponding to 88 October , at Hazza Bin Zayed Bin Stadium in the sisterly United Arab Emirates.

The “saib” Super Cup car roamed before the match’s activities in the streets of Cairo, and football questions were asked to the audience. The Bank distributed instant gifts to the winners.

The Marketing and Corporate Communications team also The bank accompanied a number of people of determination to attend the match, and gifts were distributed to the fans of Al-Ahly and Zamalek teams, and they shared the enthusiasm of their teams during the match. In cooperation with VISA.. QNB Al Ahli Bank announces that a number of its customers have won tickets to attend the 2022 FIFA World Cup Qatar matches from the stadium With a capital of 500 million pounds.. The Agricultural Bank: the establishment of the Ard Misr Company for Silos, in cooperation with the Ministry of Supply, to open outlets for the sale and marketing of commodities *The Embassy of the State of Qatar in Cairo, in cooperation with QNB Al-Ahly and Qatar Airways, inaugurates an area dedicated to watching the FIFA World Cup Qatar 2022 TM matches* QNB Al Ahli Bank decides to raise the return on savings certificates with a fixed annual return of up to 17.25%