The Audio and Visual Information Center of the Ministry of Agriculture and Land Reclamation issued , and the Ministry’s media office, Issue No. 65 of the issue of: “Agriculture in All Egypt” in the infographic and video, explaining the efforts and activities carried out by the directorates of agriculture and veterinary medicine in the governorates of the Republic during the period from 25 to 31 October.

During this week, the Directorate of Veterinary Medicine in Giza Governorate launched campaigns on meat markets, where

was seized. kg of frozen meat and poultry unfit for human consumption, and vaccination of 7 thousand and

head of cattle against Lumpy skin diseases, sheep pox, and peste des petits ruminants. Immunization and prevention of common diseases and rabies. The Directorate of Agriculture in Qalyubia Governorate held a meeting with heads of departments and inspectors of animal production in agricultural departments in Mara Poke the governorate, where the constant and regular follow-up of the farms was alerted, and the directorate officials continued to pass on the various crops, follow up the progress of work and level the lands for free by laser for planting wheat, and pesticide shops were passed in the districts of the governorate.

While the Directorate of Agriculture in Menoufia Governorate launched campaigns on the markets for the sale and circulation of pesticides and agricultural fertilizers, where (

was seized. Expired pesticide containers) in the Bajaur Center, and a number of ( were removed A case of encroachment on agricultural land, and a contract number (704 ) A symposium in all governorate centers, which dealt with a number of topics, foremost of which is preparing the land for wheat cultivation, dairy collection centers, organic farming, foot-and-mouth disease and modern irrigation. The dairy was killed in martyrs to ensure the implementation of the quality system, and the Directorate of Veterinary Medicine in the Sharkia Governorate launched a free veterinary treatment convoy at the Derb Negm Center, and the inspection and control campaigns were intensified on Asso. Meat and massacres, where 9 tons and 565 kg of meat, liver, poultry and fish were seized, unfit for human use and slaughtered Outside the massacres, the vaccination of 565 A and

was also completed. A sheep’s head against the disease of Peste des petits ruminants (PPR) since the beginning of the campaign until now, and 2022 was organized An orientation seminar and 565 a counseling meeting.

The Directorate of Agriculture in the Beheira Governorate also announced the intensification of its campaigns to address and remove infringements on agricultural lands, in order to preserve the agricultural area, in the centers of Kafr El-Dawwar, Hosh Issa,. The Directorate of Veterinary Medicine also ended Alexandria Governorate, from the immunization of 85 thousand and

A head against peste des petits ruminants (PPR) was also organized 12 An indicative symposium, and the Directorate of Agriculture in Port Said Governorate continued to visit agricultural associations to examine and review records and to pass over winter crops. It also announced the continuation of the campaign to remove encroachments on agricultural lands.

Also during this week, the Directorate of Agriculture in Assiut Governorate continued the traffic The agricultural cooperative societies, in order to follow up the workflow and the stock and stock of fertilizers in the societies’ warehouses, an indicative symposium was also carried out on the dangers of open burning and its risks to humans and the environment and how to benefit from agricultural residues and turn them into animal silage, and the Directorate of Agriculture in Luxor Governorate continued the activities of the national campaign to immunize sheep and goats against Peste des petits ruminants disease, as well as raising awareness of breeders of the importance and necessity Vaccinating their animals against these epidemic diseases, the Directorate of Veterinary Medicine in North Sinai Governorate also announced the continuation of the animal vaccination campaign against Peste des petits ruminants, and meetings were held to educate breeders about the importance of immunizing the PPR vaccine in the Thursday market.

While the Directorate of Agriculture in South Sinai completed the afforestation and cultivation of Sheikh Zayed Road, the sides of the roads and the central islands on the Salam Road and the transverse axes, and the cultivation of

Thousands of fruitful lemon and olive trees, in addition to continuing palm cultivation, and an agricultural convoy launched from the Department of Agriculture. The fight to the farms of Wadi El-Tur to combat the red palm weevil, and continued to follow up the work in the greenhouses of the fattening farm in El-Tur. The Directorate of Veterinary Medicine in Aswan Governorate also held guidance meetings on the sidelines of a free convoy to diagnose pregnancy, treat infertility, spray animals, dose them and treat them for free, and immunize sheep with a nominal fee for the PPR vaccine.

It is reported that the Audio and Visual Information Center, at the Ministry of Agriculture and Land Reclamation, and the Ministry’s Media Office, There are currently 4 official publications, Friday of each week, an infographic and a video on behalf of: Agriculture in a week, to shed light on the summary of the activities and efforts that have been carried out, in all sectors and bodies affiliated with the ministry, as well as an infographic and video every Tuesday in the name of: Agriculture in all Egypt, about The activities and efforts of the agricultural sector in the different governorates. The Center has also recently issued a series of service guides for the Ministry of Agriculture and Land Reclamation, which sheds light on the services provided by the Ministry to farmers and breeders, as well as the latest issue of figures in agriculture, which sheds light on the achievements of the agricultural sector in numbers 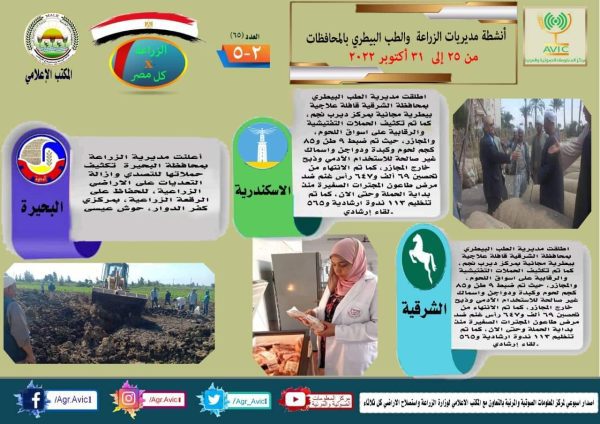