Eng. Ahmed Samir: We welcome Italian companies to invest in the Egyptian market and benefit from the availability of energy at competitive prices and trained labor

Michael Caron: A delegation of Italian companies will visit Egypt next December to enhance cooperation with the Egyptian private sector in the field of agriculture.

Minister of Trade and Industry Ahmed Samir affirmed Egypt’s keenness to strengthen economic cooperation frameworks with Italy in various fields, as it is one of Egypt’s most important strategic partners in Europe, pointing to the need for concerted efforts of the two countries at the governmental level and businessmen in particular. In light of the current global crises to advance the future of joint relations and to meet the aspirations of the Egyptian and Italian peoples.

This came during a session of talks held by the Minister with Mr. Michael Caron, Ambassador of the State of Italy in Cairo to discuss the future of economic and investment cooperation between Egypt In Italy, Dr. Martino Melli, Director of the Italian Agency for Development Cooperation, and Minister of Trade Plenipotentiary / Yahya Al-Wathiq Billah, Head of the Commercial Representation Body, participated in the meeting. to successive global crises, as it recently announced that the state ownership policy will be launched at the end of this year, according to which projects will be made available to the private sector, with a value of 10 billion dollars annually for 4 years, with a total of 40 billion dollars, in addition to the decisions regarding the liberation of the currency rate against the pound in the Egyptian market, pointing out that the state The Egyptian government did not hesitate to support its citizens to face these crises, whether by stabilizing electricity prices until June of next year and increasing wages to face the rise in commodity prices as a result of high inflation rates globally, noting that the industrial sector has begun to recover and benefit from the unprecedented benefits and support given by the political leadership. The Egyptian Ministry of Industry for the Advancement of the Industrial Sector as a Locomotive of Comprehensive and Sustainable Economic Development. Samir said that there are many opportunities to enhance joint cooperation between Egypt and Italy, as the volume of trade exchange between the two countries during the year

reached about 3 billion and 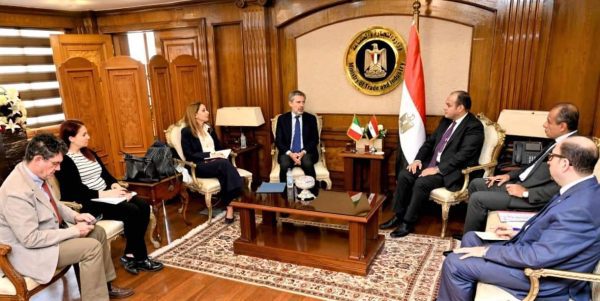 One million euros, of which one billion 301 ) million euros in Egyptian exports, pointing out that Italy is one of the largest countries investing in the Egyptian market, with total investments amounting to 2022 about one billion and 2022 in April million euros in more than 1233 projects operating in the industrial, agricultural, tourism, services, construction, information technology and financial services sectors. The Minister indicated that the Leather City project in Al-Rubiki is one of the most important projects of cooperation with the Italian side, as the ministry wants to use Italian expertise to implement the third phase of the Al-Rubiki project, which includes the establishment of 100 A factory for finished leather products in order to benefit from the incentives packages offered by the government to invest in this major project, pointing to the ministry’s keenness on the participation of major Italian companies specialized in the leather industry in the Robeki city project to localize the industry, especially since the city has a technological center at the top Standard and equipped with the latest Italian equipment and machines.

Samir called on the Italian companies that were forced to stop production completely or partially against the backdrop of the recent high energy price crisis He pointed out to the possibility of organizing meetings that bring together companies from the two countries to present the available incentives to establish successful partnerships with its counterparts in Egypt, whether through production from Italy and export to African and Middle Eastern markets through Egypt or by transferring factories to the Egyptian market and benefiting from the comparative advantages that characterize Egypt. Which include low energy prices, availability of trained and skilled labor, distinguished geographical location and free trade agreements that allow exports to access many global markets. Al-Masry and overcoming any obstacles it may face, noting that the government recently announced steps to develop and facilitate customs release procedures to increase the flow of trade. Caron, the Ambassador of the State of Italy in Cairo, his country’s keenness to strengthen the bonds of cooperation with Egypt, especially in light of the crises that have swept the world recently, the latest of which was the crisis of the Russian-Ukrainian war and its economic repercussions on the European market in general and the Italian market in particular. This included the rise in energy prices, which led to a decline in productivity rates and the suspension of some factories from work, noting that these repercussions represent an opportunity to strengthen trade and investment relations between the two countries, especially in light of Egypt’s keenness to deepen local industry and use advanced expertise to achieve an industrial boom.

Caron said that Egypt will host, during the second week of next December, a delegation of Italian businessmen in the agricultural sector representing all links of the value chains in agriculture, which include irrigation, agriculture, advanced technologies and environmental standards to enhance cooperation with the Egyptian side, especially since Italy has great experience in This field, pointing out that the final touches are being put in place to launch the shipping line between Egypt and Italy, which will contribute to increasing trade and investment movement between the two countries and increasing the exports of Italian projects operating in Egypt that export their products to Eastern European markets.

He pointed out. The Ambassador of the State of Italy in Cairo indicated that the Italian government allocates funding worth 344 one million euros for cooperation projects with Egypt, part of which is allocated for the second phase. Leather City B Rubiky and the second stage of the fissure area