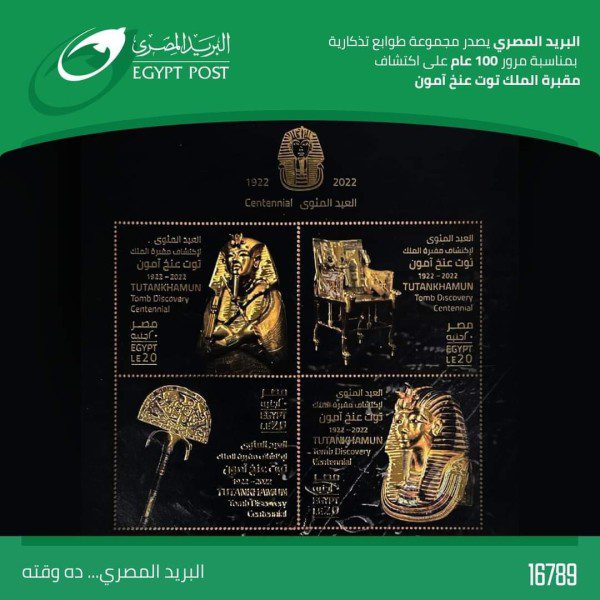 The National Post Authority issued a set of commemorative stamps on the occasion of the 100th anniversary of the discovery of the tomb of King Tutankhamun, one of the kings of the family The eighteenth century, which is considered one of the most important pharaonic archaeological discoveries in the history of ancient Egypt.

State Dr. Sherif Farouk, Chairman of the Board of Directors of the National Post Authority, said that the tomb of King Tutankhamun is the most prominent discovery during the twentieth century, as it contains the most attractive archaeological treasures around the world; Therefore, the National Post Authority hastened to participate in and document this historical event, by issuing a set of commemorative postage stamps, including four stamps, showing the most important holdings of King Tutankhamun’s tomb, which is the golden mask, the most famous belongings of King Tutankhamun, the golden coffin, and the royal chair, And the royal golden fan.

Dr. Sherif Farouk added that commemorative stamps are a means of communication It is a mirror that reflects the character of the times for future generations, and documents the history of nations throughout the ages. Therefore, the Egyptian Post is always keen to issue commemorative stamps on important events and occasions to commemorate these important events in the history of the country.

It is worth mentioning that the set of stamps marking the 100th anniversary of the discovery of the tomb of King Tutankhamun consists of 4 stamps each size (5 cm by 6 cm) insured against counterfeiting, multi-colored, the value of each stamp is 20 pounds, and it is equipped with technology The

that enables philatelists and followers to Obtain all information relating to the stamp and the occasion on which it was issued.