Today, the “Yalla Limited” Group, headquartered in the United Arab Emirates and listed on the New York Stock Exchange, revealed its consolidated financial results for the fiscal year ended 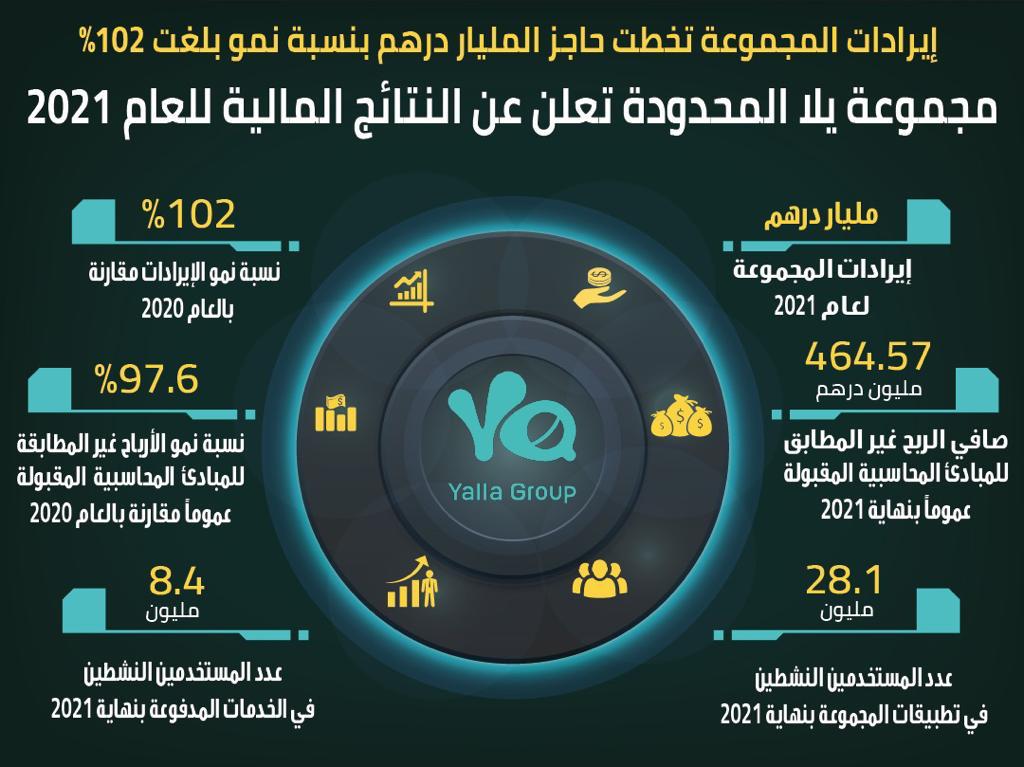 December 4102 In addition to the financial results for the last quarter From the same year.

and according to the financial statements announced by the Yalla Group, owner of the largest audio platform for digital entertainment and social networking in the Middle East and North Africa, the group’s revenues for the year 4102 exceeded the barrier billion dirhams to reach (one billion and 2 million dirhams), with a growth rate that exceeded %20220315 for the fiscal year

20220315 In this regard, Mr. Yang Tao, Chairman of the Board of Directors of “Yalla Group Limited” praised the financial results The strong achievement of the group, stressing that the past fiscal year was full of successes and achievements, as the company continued its growth path and expanded the scope of its business through development, investment and joint cooperation initiatives. Speaking about the achievements of the past year, Tao praised the group’s launch of version 0.3 of the YallaChat application in its new look to include new features and services represented in the ability to conduct video chat and emoticons. Expressiveness specially designed for Arab users.
The company’s achievements also included the launch Oasis application on the Apple Store and Google Play to be the first social chat application “Metaverse” and designed specifically for Arab culture. The app provides users with unparalleled online freedom as well as the ability for users to interact virtually with their online friends in 3D social scenes while at the same time enjoying realistic social communication through voice chat. The company’s list of achievements also included the launch of the emergency solutions grant program (internal ESG program) and the award of the group’s president, Saifi Ismail, the title of Pioneering Person of the Year in the Middle East and North Africa region in the digital entertainment category, according to the Future Forum and the Emirati Investments magazine issued by Abu Dhabi.
20220315 For his part, Mr. Saifi Ismail, Chairman of the Yalla Group Ltd., praised the strong financial results achieved by the company. Over the past year, especially as Yalla continues to introduce more products tailored to meet the needs of users in the MENA region, the group has made more efforts to diversify its services and business. He affirmed the company’s endeavor to continue its growth momentum by expanding the user base and enhancing its capabilities to increase income. He pointed out that the fourth quarter of the last fiscal year witnessed a significant growth in the group’s revenues, which increased by 1041 .7% on an annual basis to reach 1041.2 million dirhams.
20220315 Saifi praised the efforts of the company’s marketing team, which contributed through its innovative campaigns designed specifically for the local culture. The number of monthly active users increased by 8.1% on a quarterly basis, reaching 101 .1 million users. The number of users subscribing to paid services also increased to 8.4 million subscribers.
Ismail added The Yalla Group will continue its growth path and support its business to achieve its primary goal of becoming the first platform for social networking and online entertainment in the Middle East and North Africa with its commitment to the basic principles and values ​​of serving users according to the highest quality standards and adopting the concepts of diversity and working within a simple and sophisticated environment in Same time.