Minister of Trade and Industry Nevin Gamea affirmed the ministry’s keenness to coordinate with all concerned government agencies and the private sector to develop an integrated vision to increase Egyptian exports to global markets and achieve the state’s goals to reach 836 billion dollars annually, noting that the measures recently adopted by the government have achieved a positive impact on the growth rates of Egyptian non-oil exports to exceed for the first time the 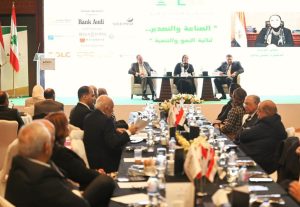 This came in the context of the Minister’s speech that she delivered during her participation in the activities of the symposium “Industry and Export ….. the duality of growth and development”, which It was organized by the Egyptian-Lebanese Association for Businessmen headed by Eng. Fathallah Fawzy, in the presence of Ambassador Ali El-Halabi, Ambassador of Lebanon in Cairo, and Eng. Mohamed Amin El-Hout, Chairman of the Industry Committee of the Society, in addition to a large number of ministry leaders and heads of companies members of the association.

The Minister said The Ministry Over the past two years, it has been keen to expand the establishment of specialized industrial complexes with the aim of increasing the proportion of the local component of Egyptian products, raising the competitiveness of the Egyptian product in the local and global markets, in addition to expanding the benefit of free trade agreements signed between Egypt and a large number of countries and regional and global economic blocs.

Jameh explained that the ministry is currently studying ways to stimulate the Egyptian industry and enhance Egyptian exports to foreign markets, in light of the great interest and support given by the political leadership to the export file, and its keenness to achieve an unprecedented boom in growth rates. and export to all productive sectors.

The Minister noted the efforts of the Egyptian government and its serious steps towards supporting the production and export sectors during the Corona Virus pandemic crisis, which contributed to the continued rotation of the production wheel, not closing factories to preserve export markets, and helping exporters in competition in global markets, praising in this context the national role of industrialists, which contributed to maintaining productivity rates and achieving indicators of any positive in growth rates and exports.

Gamee expressed her confidence in the ability of the Egyptian government, in cooperation with the private sector, to face the challenges witnessed by the global economy, and move forward towards achieving the goals of comprehensive development plans and strategies.

In her response to the association’s members’ questions about the recent decisions issued by the ministry regarding banning the export of some food commodities, the Minister of Trade and Industry clarified that the aim of these decisions is to provide strategic commodities in the local market, especially in light of the preparations to receive the holy month of Ramadan, as these decisions contributed There has been a decrease in the prices of these commodities during the past two days, noting that the ministry is reviewing the situation regarding prior contracts for exporting companies, but by studying each case individually in a way that does not harm the exporters’ community and at the same time maintaining the availability of commodities in the Egyptian market.

Regarding the recent decisions of the Central Bank regarding documentary credits, Jameh stressed that these decisions are mainly aimed at regulating the import process from abroad, especially during this stage, which is witnessing many changes on the international scene.

For his part, the Fathallah Fawzy, President of the Egyptian-Lebanese Businessmen Association, the importance of achieving cooperation and integration between the state and the business community to face the current regional and global challenges and through the development of non-traditional mechanisms to enhance investment, increase production and replace imports.

Fawzy called on the government to speed up In activating the local product preference law, activating and promoting the industrial map, granting financing incentives to manufacturers at easy interest rates, in addition to developing the laboratories and examination system to improve the quality of Egyptian products, as well as encouraging the informal sector to join the formal economy system. Engineer Mohamed Amin Al-Hout, head of the Industry Committee in the association, said that industry and production are the basis for the progress and renaissance of countries and their national security, especially after the crisis of the Corona virus pandemic, pointing out that Egypt was able to take many measures that contributed to turning the crisis into an opportunity, which resulted in the Egyptian economy achieving indicators Positive, as certified by international institutions.