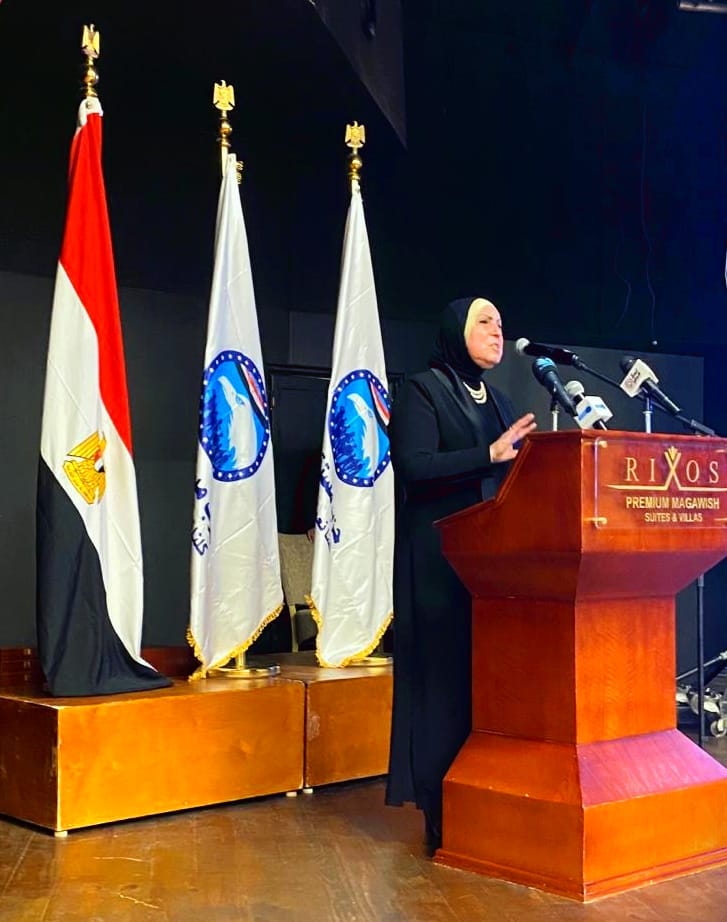 Minister of Trade and Industry Nevin Jameh confirmed The Egyptian state has made great efforts during the past seven years to enhance its position as a land of promising opportunities through dedicated work by the government to achieve tangible economic reforms and provide a decent life for the Egyptian citizen, noting that the past period witnessed many achievements and efforts to continue implementing the comprehensive development plan in All sectors in a manner that meets the aspirations and aspirations of the Egyptians towards a better future, and enhances Egypt’s position as a promising industrial and economic center at the regional and international levels. 67396

This came in the context of the speech that The Minister delivered it during the activities of the symposium “The New Republic.. Achievements Achieved” within the framework of the activities of the second parliamentary forum of the Parliamentary Committee of the Future of the Homeland Party, which was held in Hurghada, with the participation of Dr. Assem Al-Jazzar, Minister of Housing, Utilities and Urban Communities, and Deputy Ashraf Rashad, First Deputy Chairman of the Party and Majority Leader in the House of Representatives Representatives, along with a number of deputies to the House of Representatives Representatives, sheikhs, representatives of political parties and coordination of youth parties and politicians.

The Minister reviewed the most prominent achievements that have been achieved during the past years, which led to a boom in Egyptian society in all its economic and social aspects. In addition to achieving positive indicators in a number of sectors, and achieving sustainable and comprehensive growth that ensures the representation of all segments of society, noting that the government launched the sustainable development strategy, Egypt Vision 2021, which It aims for Egypt to have a competitive, balanced and diversified economy that relies on innovation and knowledge, and adopts the principle of justice and social inclusion, to achieve sustainable development and improve the quality of life for Egyptians. Enhancing Egyptian leadership regionally and internationally. 67396

Jameh explained that Egypt has taken significant steps in the way of promoting industrialization, increasing export rates and the added value of exports within the framework of a stimulating investment environment and standards. Advanced comprehensive quality, based on a comprehensive and ambitious development vision in light of the great interest of the political leadership and the government to achieve an unprecedented renaissance for the Egyptian society at all levels Saada, where the government has paid increasing attention to developing the industrial sector towards an innovative Egyptian industry, thus contributing to building a strong society and economy that pushes the wheel of development towards a better future. The Minister indicated that achieving comprehensive and sustainable industrial development comes at the top of the priorities of the ministry’s action plan, which is studying ways to stimulate the Egyptian industry and enhance Egyptian exports to foreign markets, to achieve a qualitative leap in growth and export rates for all sectors, noting that 100 A measure to stimulate industry and develop exports, which included a review of the mechanisms for implementing the industrial licensing law, in addition to the expansion of commercial visits and missions to African countries Which has a high demand for Egyptian products, activating the risk management system and green transformation and completing the work of digital linkage with the trade community.

Jameh pointed out that the ministry is coordinating with All state agencies to develop and develop existing industrial zones, establish new ones, and expand the establishment of specialized industrial complexes with the aim of advancing industrial development and benefiting from the Economic potential, available natural resources, as well as creating more job opportunities, as an integrated development plan was drawn up that included defining targeted economic activities according to the demographic nature of each region. The Minister noted that the ministry has adopted many national projects aimed at deepening local industrialization, including the local development program in Upper Egypt to promote sustainable local development, create productive job opportunities in the governorates of Sohag and Qena, and improve the business environment at the governorate level, in addition to establishing complexes. Industrial B 25 Governorate at a cost of about 27 billion pounds, as well as issuing about 7 thousand 540 License, issuing about 7 thousand 2020 First time operating license and regularization 87 A license, in addition to benefiting from the presidential initiative for the development of the Egyptian countryside “a decent life” to enhance the percentage of the contribution of the targeted centers in providing some needs of industrial activities 67396

Jameh indicated Until these faces The efforts exerted contributed to achieving unprecedented positive indicators for Egyptian non-oil exports during the year 2021, as they exceeded 67396 , 4 billion dollars, compared to 2021 . 4 billion dollars within a year 2020, with an increase rate 250 %, pointing out that these positive indicators in exports are the result of the number of measures taken It included the restructuring of the Supreme Council of Exports, the restructuring of the export councils, in addition to the immediate payment initiative launched by the Egyptian government represented by the Ministries of Trade, Industry and Finance, which allowed the payment of arrears to exporters to fulfill their obligations towards their customers, as the arrears that exceeded were paid 87 One billion dollars last year, in addition to disbursing new support.

On the state’s efforts to reconcile the conditions of informal sector projects, the ministry clarified that the issuance of the Medium, Small and Micro Enterprise Development Law and its executive regulations constitute a leap in services, privileges and facilities. What the state provides for these projects, which includes setting a unified definition for small, medium and micro enterprises, as well as providing unprecedented incentives, especially with regard to integrating informal sector projects into the formal economy system, and allowing the granting of activity licenses to unlicensed enterprises until their conditions are reconciled, as well as tax treatment. A flat tax has been approved starting from one thousand pounds annually for projects whose sales volume is less than 727 one thousand pounds and up to To only 1% if the sales volume of these projects ranged between 3 to 10 One million pounds, in addition to exempting these projects from stamp tax, documentation fees, and the month for establishing companies and establishments contracts, credit facility contracts, mortgage and land registration contracts, with the aim of alleviating the burdens of project owners, especially small and micro, noting that the period for reconciling the situation has been extended. Within the framework of the law until 2023, due to the conditions of the Corona virus pandemic. a Expanded information to inform investors of the advantages and incentives of the Law for the Development of Medium, Small and Micro Enterprises, as well as encouraging the informal sector to integrate into the national economy.