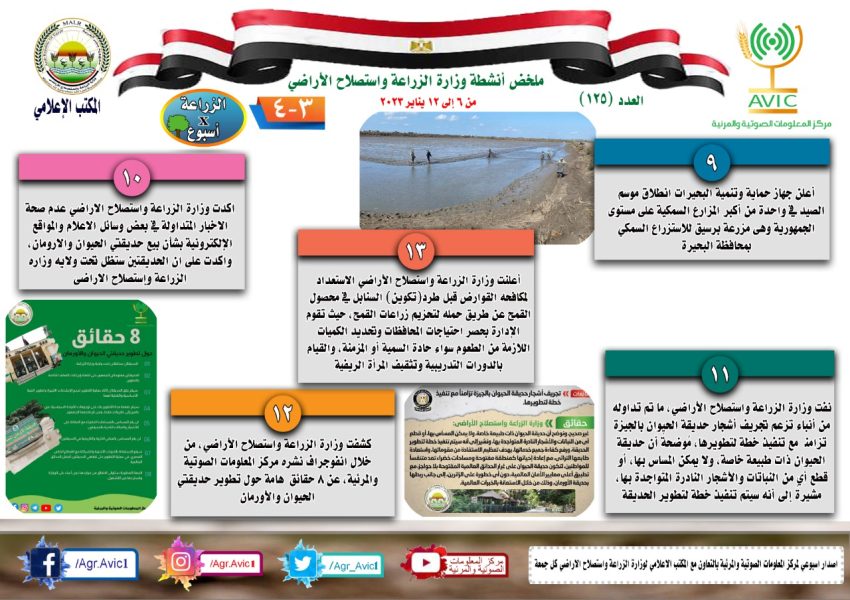 The Audio and Visual Information Center of the Ministry of Agriculture and Land Reclamation issued the “Weekly Infographic” in its 125th edition, about The weekly harvest of the most important activities of the ministry, during the past week, from 6 to 12 January, in cooperation with the media office of the ministry. The center also issued a video summary of the ministry’s activities during the same period.

Dr. Mustafa Madbouly, Prime Minister, held a meeting to review the features of the new initiative to support the productive sectors (industry and agriculture), in the presence of Mr. Minister of Agriculture and Land Reclamation, Dr. Mohamed Moait, Minister of Finance, and Eng. Mohamed El Sewedy, President of the Federation of Egyptian Industries, Mr. Essam Omar, Assistant Deputy Governor of the Central Bank, Eng. Tarek Tawfik, Vice President of the Federation of Industries, and Eng. Ali Eissa, President The Egyptian Businessmen Association, and Eng. Alaa Al-Saqati, President of the Federation of Small and Medium Enterprises Investors.
While the Prime Minister of Somalia, Hamza Abdi Berri, and his accompanying delegation, visited the Animal Health Institute of the Center agricultural research At the Ministry of Agriculture and Land Reclamation during his visit to Cairo, where he was accompanied by the Minister of Information, Culture and Tourism Daoud Awais Gamea, Eng. Mustafa Al-Sayyad, Deputy Minister of Agriculture for Livestock, Fisheries and Poultry, Ambassador Elias Sheikh Abu Bakr, Ambassador of the Federal Republic of Somalia to Egypt, and a number of Somali officials.
Mr. Al-Qaseer, Minister of Agriculture and Land Reclamation, also held a meeting with Major General A.H. Karam Salem Muhammad Salameh, Chairman of the Board of Directors of the National Company for General Contracting and Supplies affiliated to the National Service Projects Authority, to review On the latest developments and developments in the project to establish a sugar cane seedling station in the Wadi al-Sa’ida area in Aswan Governorate, which comes within the framework of the state’s interest in cane farmers and raising their standard of living. The minister also announced that the fodder requirements were released during the first week of this month A thousand tons of corn and soybeans are about 150 million dollars.

While The Lakes Protection and Development Authority announced the start of the fishing season in one of the largest fish farms at the level of the Republic, which is the Barsiq fish farm in Buhaira Governorate. The SAIL Sustainable Agricultural Investments Project also announced the rehabilitation of 19, 250 longitudinal meters of waterways in the Mutobas area – Kafr El-Sheikh in villages (Ibrahim El-Desouki – El-Sayed El-Badawy – Sidi Talha), which contributed to overcoming the problem of lack of access Water to the ends of the branches.

The Ministry of Agriculture and Land Reclamation also confirmed that the news circulating in some media outlets and websites regarding the sale of the Zoo and the Roman Zoo is incorrect, and confirmed that the two parks will remain under the jurisdiction of the Ministry of Agriculture and Land Reclamation, as well She denied what was circulated of news claiming that the trees of the Zoo in Giza were bulldozed, coinciding with the implementation of a plan to develop them, explaining that the zoo Yuan is of a special nature, and it cannot be touched, or cut down any of the rare plants and trees in it, indicating that a plan will be implemented to develop the park, and she also revealed, through an infographic published by the Audio-Visual Information Center, 8 important facts about the development of the Zoo and Orman Zoo.

The Ministry announced its readiness to control rodents before expelling (forming) the spikes in the wheat crop by carrying it to pack wheat crops, as the administration lists the needs of the governorates and determines the necessary quantities of grafts, whether acutely toxic or chronic. And conducting training courses and educating rural women, and a veterinary convoy was also implemented in Qalyubia Governorate; To treat the livestock of small farmers and breeders, where more than 400 heads of cattle were treated and examined free of charge for small breeders in the village of Shablangeh in Qalyubia Governorate within the framework of the presidential initiative, a decent life. More than 6.6 million doses were given against patients with foot-and-mouth and Rift Valley fever during the third national campaign, which It started 19 last November, within the framework of the “Decent Life” initiative.

While the Central Laboratory launched For the analysis of pesticide residues and heavy elements in food, the activities of the first training program for the year 2023 in the field of (methods and techniques for microbial examination and assessment in food and environmental samples), which lasts for 5 days. The laboratory in the workshop organized by the Institute of Standardization and the German Agency for International Cooperation (GIZ) on the joint project between them to develop and raise the efficiency of the analysis bodies in the field of food, while the total number of certificates issued by the laboratory with the results of the analysis of samples received from customers during this week was about 7600 Testimony.