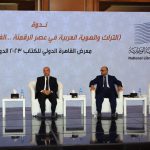 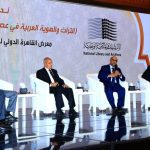 His Excellency Mohammed Al-Murr, Chairman of the Board of Directors confirmed The Mohammed bin Rashid Al Maktoum Library Foundation stressed the importance of the Egyptian-Emirati relations in the cultural aspects in light of the Egyptian historical leadership, which he confirmed played a major role in the development of various aspects of cultural life in all the countries of the Gulf Cooperation Council.

This came during a symposium organized by the Archives and the National Library in the UAE, today, Monday, January 23, at the Intercontinental City Stars Hotel in Cairo, under the title: “Arab Heritage and Identity in the Age of Digitization… Opportunities and Challenges,” in the presence of a group of intellectual and cultural leaders in Egypt and the UAE. within the framework of his readiness to participate in the Cairo International Book Fair. The electronic system has begun to affect our daily lives, placing new burdens on museums, libraries and various Arab cultural institutions, to transform from mere centers of knowledge into a vast cultural space that relies on digitization. In addition to providing audio and digital books to keep pace with the developments of the times.

He mentioned that there are challenges facing the Arab nation after major cultural central Arab countries faced civil wars during the last period, which affected their museums, antiquities and libraries. Which faces financial, administrative and other problems, adding that Egypt and the Gulf now bear the responsibility for the modern digital availability of heritage, pointing to the need for an “Arab cultural university” that can play expanded roles in preserving Arab heritage and making it available digitally.

For his part, His Excellency Abdullah Majid Al-Ali, Director General of the Archives and National Library, stressed the importance of the archives and the National Library in the UAE in preserving the identity and heritage of the Emirates, adding that there are many knowledge tools that need digitization to preserve the Arab and intellectual heritage based on the means of artificial intelligence.

“Al-Ali” added that the UAE Archives and National Library are cooperating with the British Archives in digitizing documents related to the Arabian Gulf, and are working continuously to preserve Arab heritage and highlight it to the world by keeping pace with the best modern digitization methods. .

The Director General of the UAE Archives and National Library drew attention to the importance of having unified policies for digital preservation, and working within a collective cultural system to reach various youth groups, stressing the importance of translation projects in preserving Arabic documents, with the existence of a unified Arab platform for preserving Heritage.

In the same context, Dr. Ahmed Abdullah Zayed, President of the Bibliotheca Alexandrina, stressed that the world of digitization has become firmly established within various cultural institutions, adding that work must also be done in parallel to preserve identity from disintegration. In light of the challenges of the digital world.

The President of the Bibliotheca Alexandrina added that it is required to adhere to digitization and heritage alike, indicating that the library has a project to document the natural, cultural and intangible heritage, in addition to the existence of a house of expertise for restoration The manuscripts are 6,000 handwritten manuscripts, 120,000 illustrated manuscripts, in addition to a large number of rare books. Pointing out that the library has 2 million digitized sources, whether in the form of magazines, newspapers, books, etc.

Continue: “We must discuss the importance of enabling young people to access and adhere to our heritage, as the digital identity has become an integral part of the personality of the era, which has suffered distortions in various aspects of culture that need policies to protect it within the framework of belief in human pluralism.”

His Excellency Dr. Abdulaziz Al-Musallam, President of the Sharjah Institute for Heritage, also stressed that folklore has benefited from the world of digitization, which provided a means for preserving tangible and intangible heritage, pointing to the importance of digitization in interactively telling the folktale, and promoting it. On social networking sites.

The head of the Sharjah Institute for Heritage added that there are many digital means that allow preserving and making heritage available, including hologram techniques that allow the reader to follow stories and interact with them virtually, which encourages him

For his part, Dr. Osama Talaat, head of the National Book and Documentation House, confirmed that the house contains the memory of the Arab and Islamic nation, and is a basic pillar for preserving its heritage and culture, as it includes the house Rare manuscripts starting with the oldest document by Sultan Mansur Qalawun from the september century Al-Hijri, up to the era of Muhammad Ali, stressing the state’s interest in heritage and manuscripts and taking care of them. Pointing out that the authority has sought to keep pace with modern technology since the nineties, through microfilm techniques, leading to the implementation of the largest project for digitizing documents and manuscripts, which is currently being implemented by the authority, which he confirmed is entering with the Egyptian Ministry of Communications in other projects for digital modernization.

“Talaat” drew attention to the requirements imposed by the implementation of the Intellectual Property Protection Law, as the National Library and Documentation House works on digital availability in accordance with the provisions of the law, referring to the House of Books’ efforts to receive various trips from various schools and educational institutions. To link new generations to the diverse Arab heritage.