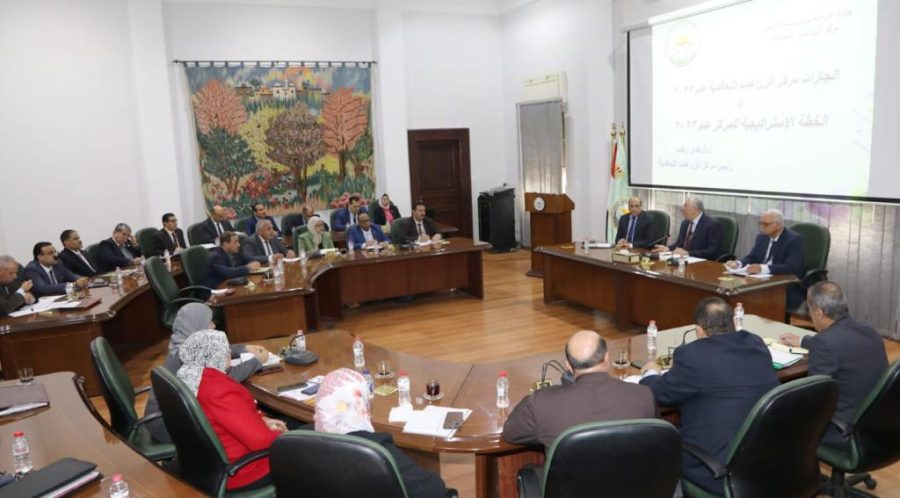 Mr. Al-Qusayr, Minister of Agriculture and Land Reclamation, held a meeting To the directors of the agricultural directorates in the governorates, to follow up on many important files, on top of which is the completion of the inventory of the area cultivated with wheat, the prevention of encroachments on agricultural lands, the activation of contractual farming in corn, beans and soy, and the follow-up of assets and the irrigation modernization system

At the beginning of the meeting, “Al-Qusayr” confirmed that there are directives from His Excellency President Abdel Fattah Al-Sisi, President of the Republic, to pay attention to strategic crops to achieve food security for citizens 20230125 The Minister of Agriculture assigned the directors of the districts to quickly complete the actual inventory of wheat cultivations from the ground

Referring to the government’s decision, based on the directives of the President, to increase the prices of wheat imports to

The Minister of Agriculture stressed during the meeting the necessity of continuous follow-up of the file of encroachments on agricultural lands, intensifying field traffic to prevent encroachments, removing any encroachment case in the cradle, and taking the necessary measures against the trespassers, to preserve the agricultural area, the main source of food.

The assignments of the Minister of Agriculture to the directors of the agricultural directorates included the need to tighten control over the fertilizer file in agricultural associations, and to ensure the arrival of support to those who deserve it, and flexibility in distributing fertilizers and permanent, continuous and sudden passage to associations. Awareness campaigns about the system of switching to modern irrigation, and introducing farmers to the benefits that accrue to them, as well as working to facilitate procedures to encourage farmers to switch to modern irrigation, and remove any obstacles to the implementation of the project 0068 The Minister of Agriculture directed to the importance of developing agricultural associations in villages and providing services suitable for farmers, 20230125 and also encourage farmers to grow strategic crops, especially after the state bought these lands He also directed to encourage farmers to grow corn and soybeans after activating contract farming in these two crops, which are considered the main component of fodder, stressing the availability of good approved seeds for corn and soy, The Minister of Agriculture stressed the directors of the agricultural directorates in the governorates of the need to follow up all the assets of the ministry, each within the scope of his governorate, to ensure that they are optimally used in order to achieve the desired goals, as well as work on a solution Farmers’ problems first hand 20230125 The meeting was attended by Dr. Abbas Al-Shennawy, Head of the Agricultural Services Sector,
Dr. Hassan Al-Fouli, Head of the General Authority for Agrarian Reform, Dr. Mohamed Abdel-Aal, Head of the Land Reclamation Sector Dr. Muhammad Youssef, Head of the Central Administration for Agricultural Directorate Affairs, Dr. Anwar Issa, Head of the Central Administration for Cooperation, 20230125 Dr. Hoda Ragab, Director of the Contract Farming Center and some of the ministry’s leaders