Eng. Amr Mahfouz, CEO of the Information Technology Industry Development Agency (ITIDA), received a French delegation headed by Mr. Régis Monfreud, President of the Egyptian-French Business Council The participant in the French Employers Council (MEDEF), and representatives of a number of French companies working in the fields of communications and information technology, including Valeo, Orange, IDEMIA, ATOS, Alstom, in addition to a number of officials from the French Embassy in Cairo. 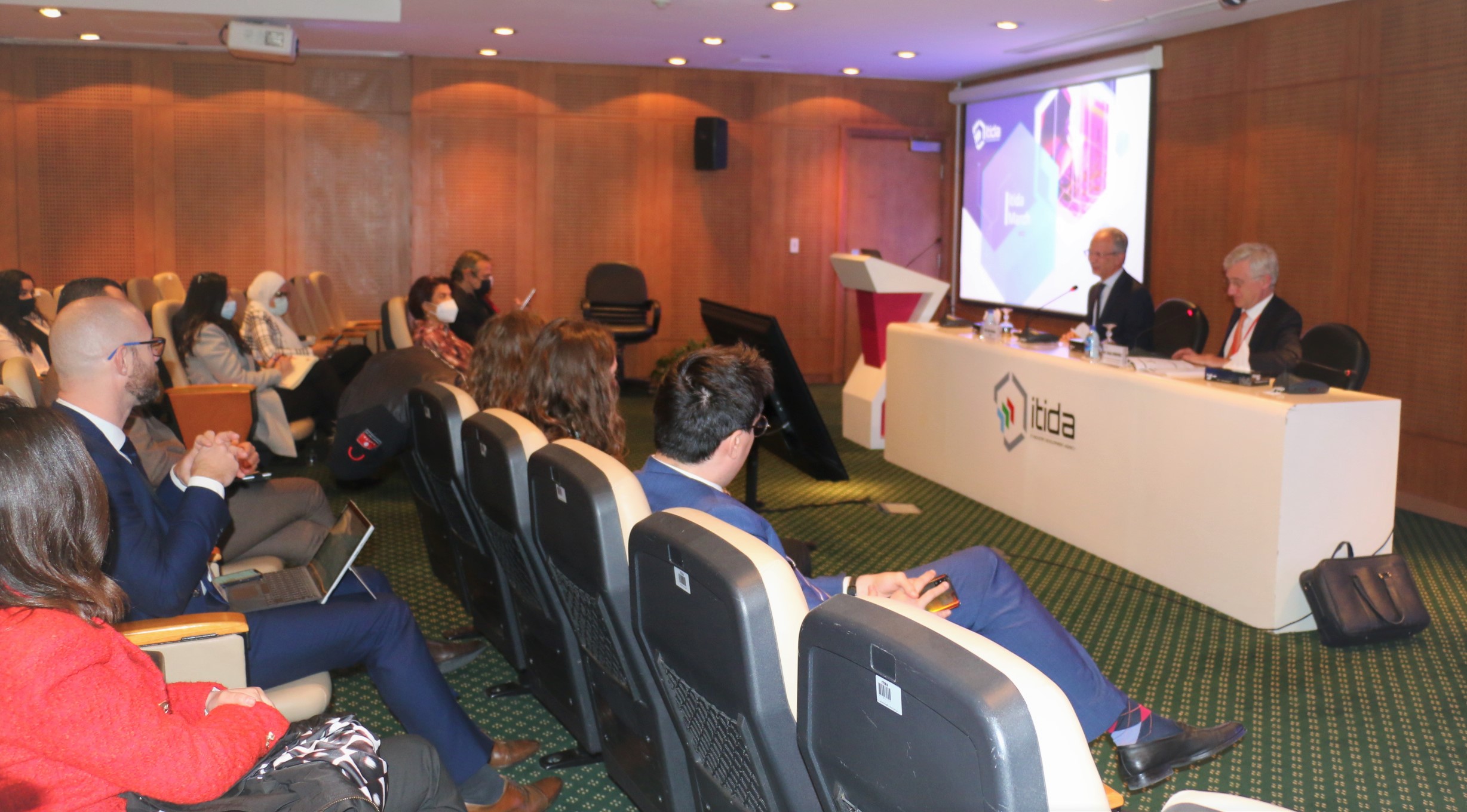 The meeting comes on the sidelines of the Egyptian-French Business Forum in Egypt, where aspects of joint cooperation were discussed in The field of information technology and the investment opportunities available in the outsourcing and cross-border services sector, the field of artificial intelligence, digital capacity building, and smart cities, as the authority seeks to enhance Egypt’s competitiveness in the fields of research and development and value-added services, which contributes to accelerating the growth of the knowledge economy.

In his speech, Mahfouz welcomed the delegation of French companies and the French Businessmen Council, and stressed that cooperation between Egypt and France goes back to a long and extended history of relations and partnerships. Constructive in various fields, especially in the information technology sector, where many French companies such as Webhelp, Valeo, Orange, Atos, Teleperformance, and other companies are working in Egypt and they have many success stories, especially those working in the areas of IT outsourcing, testing and quality of software and embedded programs.

Amr Mahfouz: The Egyptian Information Technology Sector Represents a pioneering model in attracting French investments The devaluation of the currency enhances the The competitiveness of the outsourcing sector

Mahfouz stressed that the information technology sector represents a pioneering model in attracting French investments to Egypt thanks to its global position as a preferred destination for investment and a distinguished destination for international companies. Due to the distinguished opportunities it offers in the field of exporting services and the low cost of business compared to other countries, especially in light of the depreciation of the local currency against the US dollar, which enhances the competitiveness of the outsourcing sector, in addition to Egypt’s abundance of young cadres, professional technical skills, and a plurality of jobs. In order to meet the needs of the French and European market in general, as well as the strategic importance of its geographical location in relation to European countries.

During the meeting, the strategy of digital Egypt for the outsourcing industry prepared by the authority was reviewed in cooperation with Ernst & Young. The global advisory board, and presented a set of new incentives provided by the authority to attract investments and encourage existing companies in the Egyptian market to expand their operations.

On his part, praised Mr. Regis Monfreud , head of the French side of the French-Egyptian Business Council in the Council of Employers French Businessmen (MEDEF), on the history of Egyptian-French relations, and stressed his country’s aspiration to more partnerships and to enhance ways of joint cooperation. Monfrew stressed that Egypt has many promising opportunities and plays a vital and influential role in the growth of the information technology industry in the Middle East and North Africa. He also praised the stability, radical reforms and growth that Egypt is witnessing thanks to the efforts of the political leadership, which works on the growth of the Egyptian business environment, attracting foreign investments and advancing the Egyptian economy.

Monfrod referred to Egypt’s stable economic performance according to the World Bank report, and the Egyptian state’s determination to implement Egypt’s Vision 2030 to work towards achieving the principles and goals of sustainable development in all fields, in a way that encourages attracting More investment and enhanced prospects for cooperation. He stressed the French side’s aspiration for more opportunities for cooperation and investment in major projects.

, responsible for sustainable development and external relations at the French company Valeo, expressed his great admiration for the efficiency of Egyptian engineers in the field of electronics and embedded software design compared to their counterparts in competing countries. He also expressed his aspiration to enhance cooperation with Egypt in the fields of electronic chips, electronics design and manufacturing companies, and embedded software companies, in light of the many promising opportunities for partnership between European, Mediterranean and North African countries, including Egypt, with the aim of enhancing its competitiveness in this field. The competition remained with the countries of Asia and America.

It is worth mentioning that the French Employers Council (MEDEF) works to promote the export of French companies’ expertise, trade exchange, technological cooperation, long-term partnerships and investments. It works in Egypt towards 1598 a French company in many fields, foremost among which are banking services, banking, tourism, communications, information technology, energy and environmental services.