The Arab Academy for Science, Technology and Maritime Transport – Smart Village Branch – signed today, Friday, March 25, a joint cooperation agreement with Port Said Governorate, where the signing ceremony of the agreement was held at the Academy branch in Port Said. 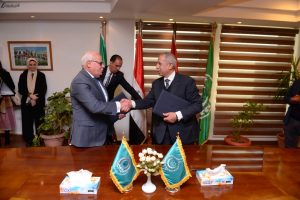 The agreement was signed by His Excellency Major General A. H. / Adel Al-Ghadban, Governor of Port Said, and His Excellency Dr. / Ismail Abdel Ghaffar Ismail Farag, President of the Arab Academy for Science, Technology and Maritime Transport.

This is intended The agreement calls for the cooperation of the Faculty of Engineering and Technology at the Academy’s branch in the Smart Village and Port Said Governorate in documenting urban and heritage areas through the work of raising Three-dimensionality of some heritage buildings of value within Port Said governorate to enhance and encourage internal tourism in the governorate and spread cultural awareness of the importance of these heritage buildings and their relationship to society and reality.

The agreement also stipulates that Port Said Governorate will benefit from the expertise of the Arab Academy in particular. In the field of educational and research curricula, in addition to providing the academy with its expertise in the field of studies, research and training in light of its societal responsibility.

His Excellency Major General A. H. / Adel Al-Ghadban, Governor of Port Said, had received His Excellency Prof. Dr. Ismail Abdel Ghaffar Ismail Farag, President of the Academy, in his office at the General Court of Port Said Governorate.