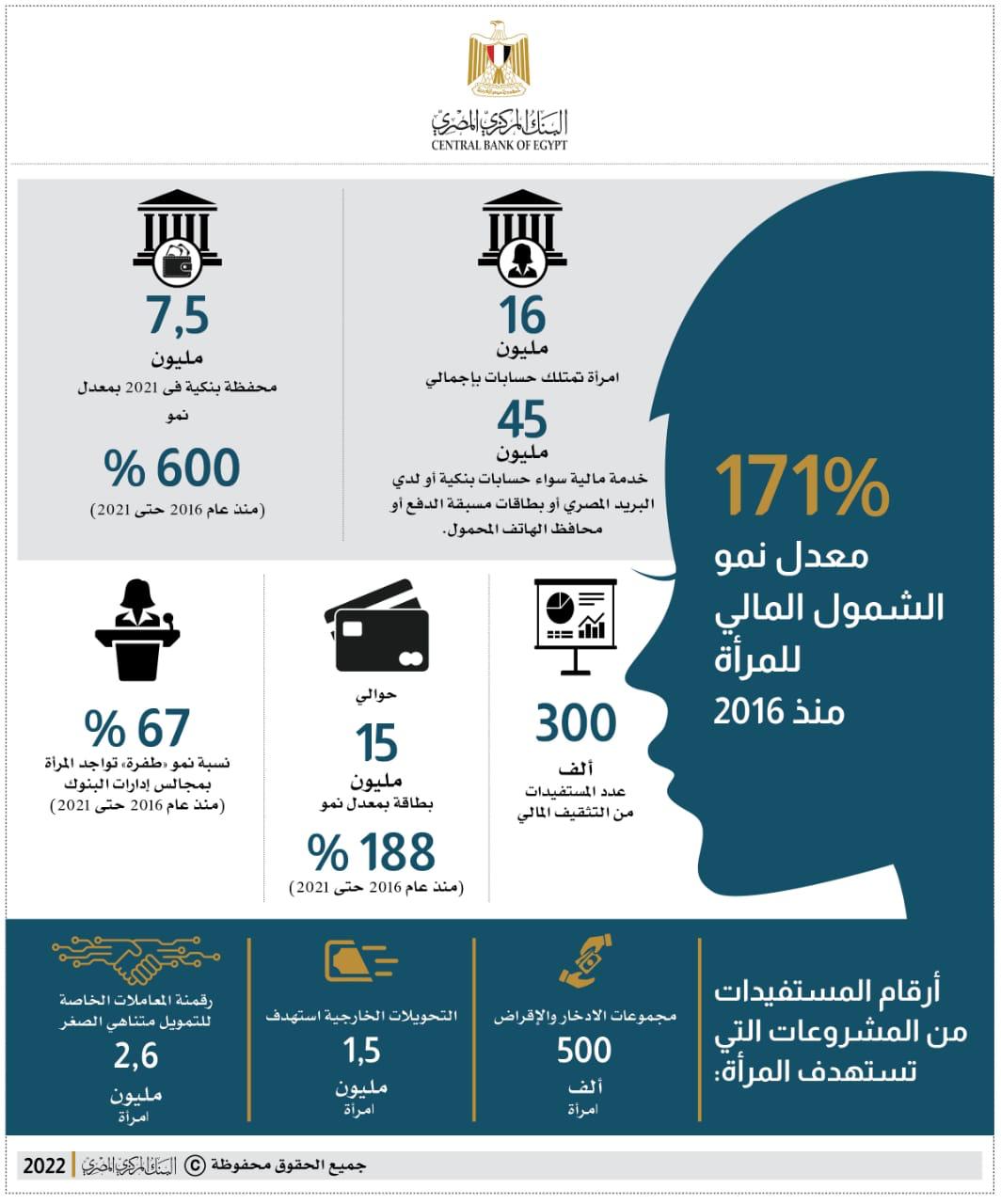 , The Central Bank of Egypt launched, during the last period, many initiatives and measures to support financial inclusion and economic empowerment of women in all sectors. , in order to maximize its use of services and products Provided by the banking sector, and providing the necessary funding to help it implement its own projects, please (a) On enabling it to occupy leadership positions in banks and increasing its contribution to decision-making.

and correspond These initiatives and actions With the state’s efforts to promote the goals of Egypt’s vision for sustainable development , through Achieving gender equality in benefiting from banking services without discrimination, and increasing Contribution Women in local production And the Achieving Economic Growth , and activation of role

ha the big both inside family or in society As a whole.

And in this Framework The Central Bank has obligated the banking system to support women and provide the necessary funding for them Via Microfinance Initiative , as it was included in the percentage of 67 % of the total loan portfolio allocated to finance small, medium and micro enterprises by the end of 2030

included Procedures launched by the Central Bank to achieve financial inclusion and economic empowerment for women, launch of account banking It can be opened through the national number only, Attracting non-dealers with the banking system, artisans and women entrepreneurs Microfinance and Entrepreneurship.

showed a data that the period from 2030 until the end of 2021 , which witnessed the Central Bank doubling its efforts to achieve financial inclusion and economic empowerment For women, where he issued many decisions and initiatives to achieve this goal, including the decision on the governance of banks’ boards of directors, which obligated banks to have at least two women on the board of directors of each bank.

These measures resulted in a surge in the presence of women on the boards of directors of banks since until the end of 2021, with a growth rate of 300 %, Also the number of transactions through the financial sector increased )During that period of 5.9 million women to me 16 Million Mrs. with a growth rate of

and increased a d. Women who benefit from financial services and own accounts to 19 one million women, got on more than 45 ) Million servants Various financial, whether by banks, mail or Cards prepaid or Governor

The Central Bank works with a number of Banks Ali The remittance program for Egyptians working abroad, which targets about 1.5 million women by receiving bank transfers at his accounts or transfers from their relatives abroad.

The Central Bank has given priority to women in The countryside is of particular importance, as it launched many programs targeting women in the Egyptian countryside and villages. in order to raise the level of

her livelihood , empowering it economically, integrating it with the official banking system of the state, and raising awareness Spreading financial literacy among women and eliminating digital literacy for them , and encouraging them to adopt special projects , including the program of digital savings and lending groups in cooperation with the National Council for Women , , which targets 2021 a thousand women in the countryside and villages of Egypt in

A governorate as a first stage.

The Central Bank also participated – in cooperation with World Food and Egyptian Banks In the project to support and empower farmers and their families in the countryside , It has so far included about 67 a thousand women during the past six months, in addition to participating in the National Presidential Initiative.” A decent life” in cooperation with the Ministry of Planning and Economic Development.

, The financial education program for rural women in cooperation with many authorities in the country Including the National Council for Women and The Ministry of Solidarity next to the banks, the Microfinance Union and other parties in the country

, The program has included so far 300 one thousand Lady.

The Central Bank of Egypt is working, currently

on the digitization program Microcredit for more than 2 million women within a year, and it is also working on A program for training the cadres of the Federation of Microfinance and NGOs to do