Orman Association announced that it is in cooperation with GEG Egypt and under Sponsored by the Directorate of Social Solidarity in Gharbia and the Agricultural Administration in Zefti Center, they planted 10 rooftops in the village of Sunbat, Gharbia Governorate. 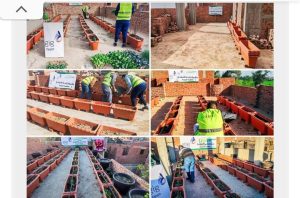 Major General Mamdouh Shaaban, Director General of the Orman Association, confirmed that the cultivation of roofs included vegetables such as lettuce, kobcha, peppers, cucumbers, tomatoes, eggplant and watercress As well as a group of fruits such as grapes.

Shaaban explained that the cultivation of rooftops It came in order to achieve self-sufficiency for families in many agricultural products with the possibility of developing the project in order to market the surplus and thus find additional sources of income. It is sufficient for the family, noting the many benefits of rooftop cultivation, as in addition to providing fresh material free of chemicals, the project reduces pollution and limits the increase in carbon dioxide in the surrounding atmosphere, in addition to reducing water consumption where drip irrigation is carried out.

For his part, Mr. Alaa Al-Zuhairi, Managing Director of GEG Egypt, affirmed the continuation of support The developmental role initiated by the Orman Association and the encouragement of such initiatives to achieve the sustainable development goals of eradicating hunger and poverty, providing decent work, economic growth, creating pollution-free societies and preserving the environment.

It is worth noting that the cultivation of roofs is a continuation of the developmental role that the Orman Association started more than year in all governorates of Egypt, and emphasizing the role of civil work in developing societies to achieve sustainable development goals and Egypt’s vision 2030.