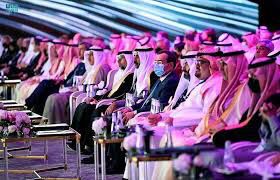 His Royal Highness Prince Abdulaziz bin Salman bin Abdulaziz, Minister of Energy, confirmed , that the young leadership is determined to create the future of this country, demonstrating the capabilities and strength of the Saudi youth, stressing that the Kingdom is in continuous movement, represented by Riyadh, which has become the city of happiness and joy in less than five years.

His Highness said The Corona pandemic was not taken into account, but with our wise leadership and its ambitious youth, we were able to overcome the pandemic. This matter is his full attention until economic stability is achieved.

And His Highness the Minister of Energy added, if we do not achieve our collective goals, we will not achieve our individual goals, and the Kingdom continues to invest and expand its production capacity, and focus on specific elements such as alternative energy alone will be A grave mistake, and the world must look at all sources of energy. 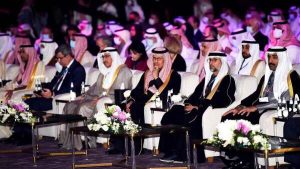 Prince Abdulaziz bin Salman stated that the campaign against oil and gas is short-sighted, and the Kingdom It will continue to invest in oil and gas and will work to raise its production capacity, in addition to working to achieve zero neutrality, with the benefit that most of what is spent on it is technology, and the Kingdom is working with an integrated system.

For his part, His Excellency the Minister of Oil said Kuwaiti Dr. Muhammad Abdul Latif Al-Faris: “The story of OPEC and OPEC + we hope will end this year, and it must have an agreement for cooperation that must be implemented by taking the right approach in how to coordinate between us in this volatile sector.”

Al-Fares added that the balance of supply and demand and the needs of the market and the economy are being met, and we will respect the OPEC and OPEC + agreement, and there is a mechanism to reach an agreement, and we will show the world that we can We must ensure the reaction, and we have a mechanism that will clearly define how we will deal with the market on a monthly basis, stressing that Riyadh and the entire region are now putting the capital for the energy transition and using it in the best way in the next year.

And between That the Kuwaiti government has a high efficiency by setting goals and policies consistent with the region in this direction, and focuses on the circular carbon economy to reduce carbon emissions to reach zero carbon in the year

, and it will be developed in a sustainable manner To achieve goals in the oil industry sector.

For his part, His Excellency the Iraqi Oil Minister, Mr. Ihsan Ismail, stressed the need for OPEC+ to adhere to the current agreement in the interest of the energy market, with the current multilateral discussions, addressing how to strike a balance in the market between supply and demand, and avoiding any surprises in the future in the interest of all.

He indicated that Iraq is going through a strategic transformation phase, and this matter depends on converting all power plants to obtain approximately Gigawatts, and get the rest of the energy from solar energy and fossil fuels, indicating that the Arabs It has concluded agreements with international companies to generate solar energy, and the government has developed a strategic plan and allocated funds from the general budget to achieve this goal. Hydrogen will be a promising and attractive market, and the UAE aims to be a part of this future, and has projects in about 169 countries around the world.

He indicated that the conference encourages young people to focus on hydrogen through the petroleum industries in addition to blue hydrogen, noting that if investments are placed in the right way, this will contribute to reaching innovation.

His Excellency said The Egyptian Minister of Petroleum and Mineral Resources, Mr. Tariq El-Molla: “We are not members of OPEC or OPEC +, but we are a country that is watching and we have seen so far good policies, and that the OPEC and OPEC + alliance is successful,” praising the efforts and initiatives provided by the Kingdom during the last period, represented in the initiative of Green Saudi Arabia, the Future Investment Initiative and the International Conference on Mining.

His Excellency the Minister of Oil praised Bahrain Sheikh Mohammed bin Khalifa Al Khalifa praised the Green Middle East initiative, which makes the region safe and reduces carbon emissions, noting the great role played by His Royal Highness Prince Abdulaziz bin Salman, Minister of Energy, in leading the efforts of OPEC Plus and saving the global oil market from the abyss