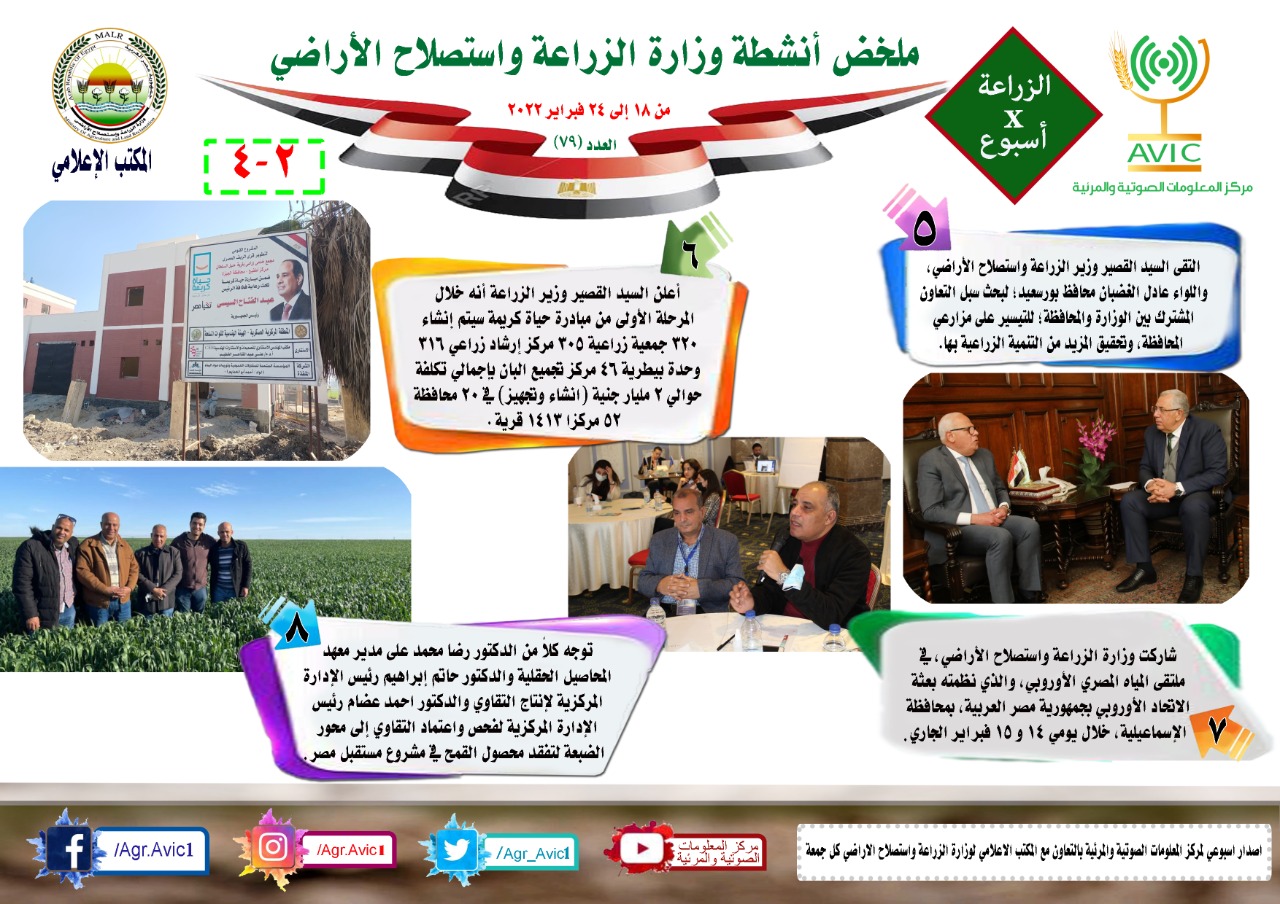 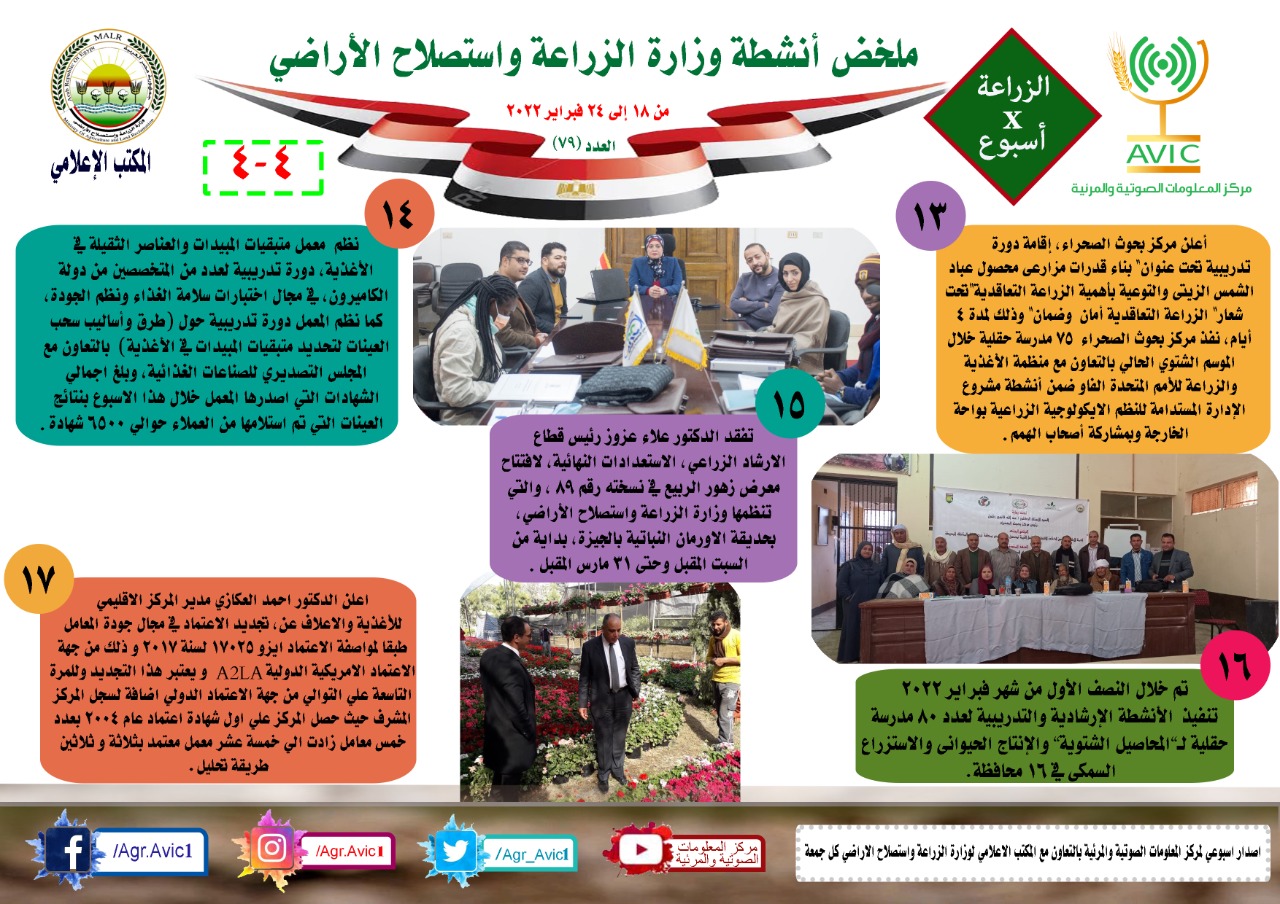 The Audio and Visual Information Center, affiliated to the Ministry of Agriculture and Land Reclamation, issued the “weekly infographic” in its 79th edition, About the weekly harvest of the most important activities of the ministry, during the past week from 18 to 24 February, in cooperation with the media office of the ministry, and the center also issued a video summary, on the ministry’s activities during the same period.

The summary highlighted the fact that Dr. Mostafa Madbouly, Prime Minister, chaired the fourth meeting of the Higher Committee concerned with preparing for Egypt’s hosting of the 24156 for the Conference of the States Parties to the United Nations Framework Convention on Climate Change (COP)27, where he followed up on the ministries’ efforts in preparing for the conference, which is scheduled to be held next November in Sharm El-Sheikh.

The Ministry’s weekly harvest indicated the participation of the Minister of Agriculture and Land Reclamation, Mr. Al Qaseer, in the first ministerial meeting of the Agricultural Innovation Initiative for Climate, which was held in the city of Dubai in The United Arab Emirates in the presence of about 15 Minister and more 20 Ministers via video conference, during his participation in the Expo 24156 currently being held in Dubai, State The Minister also held several bilateral meetings with some officials, investors and businessmen in the United Arab Emirates, as well as the head of the Arab Authority for Agricultural Investment and Development, and the Secretary-General of the Khalifa International Award for Dates. He also organized the pavilion of the Arab Republic of Egypt at Expo 2020 Dubai, United Arab Emirates, a symposium entitled “The Future of Agriculture in Egypt: Opportunities and Challenges” in which the Minister of Agriculture reviewed the promising opportunities in the field of agricultural production Livestock, fisheries, and new agricultural projects, within the framework of Egypt’s strategic vision 2030.

This week, the Minister of Agriculture and Land Reclamation, Mr. Mashimba Nadaki, received the Tanzanian Minister of Livestock and Fisheries and the accompanying delegation. He discussed with him prospects of cooperation between the two brotherly countries, in the presence of Eng. Mostafa El-Sayyad, Deputy Minister of Agriculture for Livestock, Fish and Poultry Resources, head and leaders of the National Company for Fisheries and some leaders of the Ministry of Agriculture. He also met with Major General Adel El-Ghadban, Governor of Port Said; To discuss ways of joint cooperation between the Ministry and the Governorate; To facilitate the governorate’s farmers, and achieve more agricultural development in it.

The Minister of Agriculture, Mr. Al-Qusair announced that during the first phase of the Decent Life Initiative, will be established. Agricultural Association 305 Agricultural Extension Center 316 Veterinary Unit 75 a dairy assembly center with a total cost of about 2 billion pounds (construction and equipment) in 20 Governorate 96 a center 28944522 A village. The Ministry of Agriculture and Land Reclamation also participated in the Egyptian-European Water Forum, which was organized by the European Union Delegation to the Arab Republic of Egypt, Ismailia Governorate, on February 14 and 15.

Dr. Reda Mohamed Ali, Director of the Field Crops Institute, Dr. Hatem Ibrahim, Head of the Central Department of Seed Production, and Dr. Ahmed Adam, Head of the Central Department for Examination and Approval of Seeds, inspected the wheat crop in the Future Egypt project in El-Daba’a Valley. As Dr. Ahmed Rizk, head of the Central Administration for Agricultural Pest Control, visited the wheat plantations in the Kafr El-Sheikh and Desouq centers, in the presence of those responsible for the control, in the presence of the director of the North Delta region; To check on wheat and winter crops.

Dr. Muhammad Ragai, head of the Central Department of Zoos, denied what was published about the increase in the price of entry tickets to the zoo to

The Desert Research Center announced the establishment of a training course entitled “Building the Capacity of Farmers.” Sunflower oil crop and raising awareness of the importance of contract farming “under the slogan “Contract agriculture is safety and security” for a period of 4 days, implemented by the Desert Research Center 65 A field school during the current winter season in cooperation with the Food and Agriculture Organization of the United Nations (FAO) within the activities of the sustainable management project for agricultural ecosystems in the Kharga Oasis and with the participation of people of determination.28944522

The laboratory also organized a training course for a number of specialists from the State of Cameroon, in the field of food safety tests and quality systems, and the laboratory also organized a training course on (methods and methods of sampling for determining pesticide residues in food). ) In cooperation with the Export Council for Food Industries, the total certificates issued by the laboratory during this week, with the results of samples received from customers, amounted to about 6,500 certificates. The Ministry of Agriculture, final preparations, for the opening of the Spring Flowers Exhibition in its 89th edition, organized by the Ministry of Agriculture and Land Reclamation, at the Orman Botanical Garden in Giza, starting from next Saturday until March 31, the ministry also announced that it took place during the first half of February 2022 Implementation of extension and training activities Number of 316 a field school for “winter crops”, animal production and fish farming in 16 Governorate.

Dr. Ahmed Al-Okazy, Director of the Regional Center for Food and Feed, announced the renewal of accreditation in the field of laboratory quality according to the ISO 17025 accreditation specification for the year 2017, from the American International Accreditation Authority A2LA. This renewal is considered for the ninth time in a row by the international accreditation authority, in addition to the register of the supervisory center, where the center obtained the first accreditation certificate in 2004 with the number of five laboratories, which increased to fifteen accredited laboratories with thirty-three analysis methods.

It is reported that the Audio and Visual Information Center and the Ministry’s Media Office issue an infographic and a video on Friday of each week: Agriculture in a Week, to shed light on a summary of the activities and efforts carried out in all sectors and bodies affiliated with the Ministry, as well as an infographic. And a video every Tuesday on behalf of: Agriculture in all of Egypt, about the activities and efforts of the agricultural sector, in the different governorates. The Center also recently issued a series of services guide for the Ministry of Agriculture and Land Reclamation, which sheds light on the services provided by the Ministry to farmers and breeders, as well as the latest issue of numbers in agriculture. Which sheds light on the achievements of the agricultural sector in numbers.