Egypt on the map of sustainable financing.. for the green economy

We obtained the first green financing of $ 1.5 billion with a coverage rate exceeding 3 times

Summit « COP27» A pivotal opportunity for the world. To Accelerate the Climate Action Plan 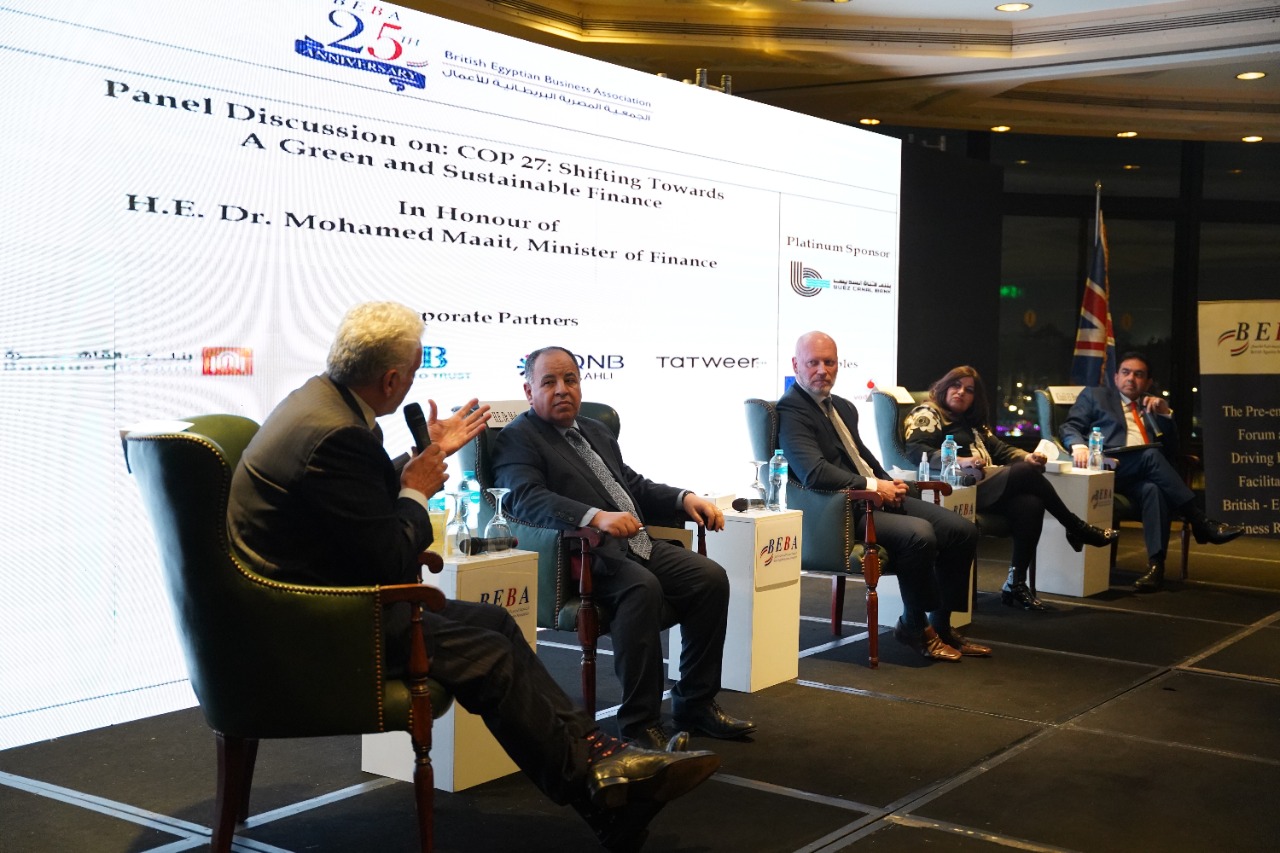 Dr. Muhammad Maait confirmed The Minister of Finance said that there is a presidential mandate to expand green and sustainable financing in the coming years, in a way that contributes to achieving development goals with environmentally friendly projects, in cooperation with “development partners” from the private sector. In line with the state’s regional efforts in combating climate change, pointing out that we aim to increase the percentage of green public investments from 15% in the current fiscal year to 30% in the new budget, and to 50% in the 2024/2025 fiscal year in order to improve competitiveness Egypt in the Environmental Performance Index.
The Minister added, during his meeting with members of the British Egyptian Business Association, in the presence of Dr. Ihab Abu Eish, Deputy Minister for the Public Treasury, Khaled Naseer, President of the Association, Nisreen Lashin, Head of the Investor Support Unit at the Ministry of Finance, Heba Abdel Latif, Head of the Financial Institutions Sector at Commercial International Bank, Khalil Al-Bawab, CEO and Managing Director of Misr Capital, and Todd Wilcox, Vice President The Board of Directors, CEO of HSBC Bank Egypt, and Karim Helal, Managing Director of the Institutional Finance and Investor Relations Sector at Carbon Holdings, said that we are keen to diversify sources of financing for investment projects, between dollar and green bonds and “Eurobonds”, and to move towards issuing sukuk sovereign; This contributes to reducing the costs of financing comprehensive and sustainable development, and thus the sustainability of public financial indicators, to preserve the economic gains, noting that we succeeded in issuing the first sovereign green bond offering in the Middle East and North Africa, with a value of 750 million dollars in September 2020, For five years, at a return price of 5.250%, which puts Egypt on the map of sustainable financing for the green economy, pointing out that this issuance witnessed a very high demand from investors, as purchase orders exceeded the announced issuance volume “500 million dollars” equivalent to 7.4 times, The “acceptable volume” exceeded $750 million, equivalent to 5 times, and that this issuance attracted 16 new investors for the first time from Europe, the United States of America, East Asia and the Middle East. The Minister explained that Egypt’s first sovereign green issuance won the “Leadership Issue in the Green Market” award, and the “Sustainable Finance Award for the Best Sustainable Financing Deal,” and the proceeds were directed from this Issuing the implementation of 15 national projects in many governorates in various fields, including: “Water and sanitation projects in North and Genoa.” b Upper Egypt, the El-Dabaa desalination plant in Matrouh, the water treatment plant in the village of Arab El-Madabegh in Assiut, and the water treatment plant in Mahamid in Aswan, and renewable energy and clean transportation projects, including: the “Monorail” project, which will serve the governorates of Greater Cairo; In a manner that contributes to achieving the sustainable development goals.
The Minister confirmed that we obtained the first green financing in November 2021 with an amount of $1.5 billion from a group of international and regional commercial banks, with a subscription that achieved high levels of demand with a coverage ratio of more than 3 times. For example: water treatment and desalination plants, solid and medical waste management and treatment, rehabilitation and lining of canals, completion of the second phase of West Port Said projects, and water desalination projects. The Minister indicated that the Egyptian government is preparing to host the 27th session of the Conference of the Parties to the United Nations Framework Convention on Climate Change, to be held in Sharm El-Sheikh next November, under the slogan “Together for implementation”; As a pivotal opportunity for the whole world to work together to accelerate the climate action plan in accordance with the principles of the Kyoto Protocol and the Paris Agreement; In a way that contributes to implementing what was agreed upon during previous climate change conferences, coming up with recommendations and serious executable initiatives, and reducing harmful emissions resulting from global warming, along with supporting the efforts of African countries to mitigate the repercussions of climate change, and updating Egypt’s specific national contributions. The Paris Agreement, and among the initiatives implemented to combat climate change: the initiative to replace aging vehicles with new ones that run on natural gas, and it is targeted during the coming period to approve a stimulus package to localize the electric car industry in Egypt.