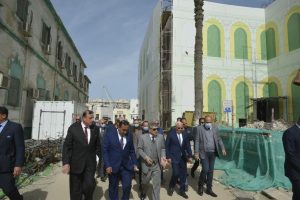 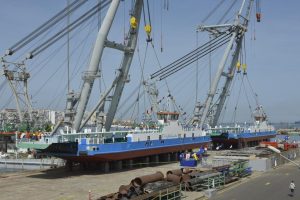 As part of the periodic follow-up to the progress of work, the team inspected Osama Rabie, Chairman of the Suez Canal Authority, accompanied by Major General Adel Ghadban, Governor of Port Said, a number of work sites of the authority in Port Said governorate, including the Port Said Naval Shipyard and the Dome Building, in the presence of a group of board members and leaders of the authority.

During his inspection tour of the Port Said Shipyard, Lieutenant-General Osama Rabie and Major General Adel Al-Ghadban witnessed the inauguration of the two ferries “Karama 1” and “Karama 2” with a load of 320 tons each Which was manufactured at Port Said Naval Shipyard to serve the transit movement of vehicles and individuals in the northern sector of the Suez Canal (Port Said city).

The head of the authority listened to a detailed explanation Describe the stages of construction of the two ferryboats and the time it took to build, which amounted to 0032 months, and he also learned about the dimensions and specifications of the two identical ferryboats, where the length of one ferry is 200 meters, and its width is

a meter, a draft of 1.4 meters, and a speed of 7 knots, and one ferry can accommodate 50 Arab owners, other than individuals, and it is scheduled to enter the service of the two ferries to connect the cities of Port Said and Port Fouad during the end of the month

Subsequently, Lieutenant General Rabie and Major General Adel Al-Ghadban welded two ferryboats with a payload 225 A ton per ferry, to serve the transit movement of vehicles and individuals in the southern sector of the canal in the Shatt axis in Port Tawfiq, and the length of the ferry is 0033 meters, its width is 0031 meters, and its draft is 1.4 meters, And its speed is 8 knots.

The head of the authority directed to adhere to the schedule and observe weather standards This was during the manufacturing and construction process, stressing the authority’s commitment to performing its historic role in linking the two banks of the canal, noting that it is scheduled

Welding of a third similar ferryboat at Port Tawfik Shipyard.

during his tour of the shipyard, Lieutenant-General Rabie was keen to salute the men of the Port Said Naval Shipyard, praising their efforts and urging them to continue working to raise the status of the prestigious shipyard, which plays an important role in the maintenance of all the various marine units affiliated with the authority, in addition to its role in building marine units and modernizing the ferry facility.

After that, Lieutenant-General Rabie and Major General Ghadhban went to the Dome building in Port Said to follow up on the developments in the restoration of the historic building and efforts to restore it to its former state.

The restoration works include the entire parts of the historic building, including floors and ceilings, in addition to finishing and fixture works.