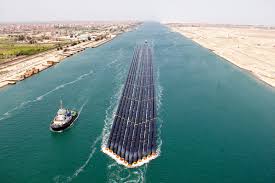 The International Transport Division expects a rise in freight rates affected by the war..a golden opportunity for Egyptian ports

said Dr. Amr Al-Samdouni, Secretary of the Division’s Secretary Transport and Logistics at the Chamber of Commerce, that Russia’s invasion of Ukraine portends a new global economic crisis in all of Europe and will also directly affect global growth, which is already suffering from the repercussions of the Corona pandemic that crippled the economies of the world as a result of the closure that occurred more than once, and whose severity may be great on all The countries of the world considering that the two countries are the largest exporters of natural gas, as the European Union obtains from them 49 % of its needs in addition to the fact that they export wheat with a percentage of 41% globally, just as Europe alone imports about 45 % of gas and about 45 % of oil from Russia and with Russia’s refraining from exporting, Europe will face a crisis in continuing development and operating its factories, and with the rise in the price of gas By 500% as a result of the war between Russia and Ukraine, the cost of transportation and products will rise, which will cause great harm to Europe, and will even hit Europe The European economy, and at the heart of it is the German economy.

Al-Samdouni explained that the Russian military operation in Ukraine contributed to the disruption of the global supply chain, which has not yet recovered from the negative effects of the pandemic, which added to the high costs and caused Delaying shipments, in addition to other challenges faced by companies trying to transport goods around the world,

Al-Samdouni pointed out that the shipping movement from the Black Sea region is currently experiencing confusion due to the war, which has led to the suspension of a number of shipping lines to and from Ukraine, and due to the crisis, many logistics companies intend during the coming period to start searching for alternative markets to compensate for the suspension of shipping lines with the two countries, and these alternatives are represented in several countries, including Romania, France, Brazil and Argentina. Al-Samdouny expects that the Black Sea will be classified as a high-risk area during the coming period, and this will likely lead to an increase in the insurance premiums required for shipping goods or transporting them through these waters, especially since it is not clear how long this change will last, and the more attacks escalate and reach a major war, The lines are heading to Imposing risk fees that are charged to freight freight, similar to what happens during wars, as well as the cost of shipping from countries outside Ukraine is likely to rise as long as the price of oil rises, but shipments from Ukraine are naturally suspended, as insurance companies will not insure these shipments.

It is also expected that freight freight prices will rise during the next few days, as a result of raising the value of insurance cover on ships, tankers and all their employees, especially those passing through the Black Sea, which actually witnessed a 5% increase before the war, in addition to the increase in oil prices.

Al-Samdouni pointed out that the most prominent raw materials whose prices are expected to rise globally due to the dominance of Russia and Ukraine are uranium, titanium, manganese, iron ore, mercury, coal, sunflower oil, barley, potatoes and ammonia.

As for ration supplies such as wheat, where Russia and Ukraine control its supply to the world by 49 % Due to the ongoing war, a state of competition will arise between importing countries over the available quantities of wheat, which will create a state of global conflict as a result of concerns related to the Ukrainian crisis.

Egypt’s position in the crisis

Al-Samdouni believes that Egypt is part of the world and is indeed affected by what is happening in it, but the influence is between Countries and other variables according to the links of that country to one of the two warring countries, and despite the presence of negative effects, there are other positive effects, and although the repercussions are still in the beginning, it is certain that prolonging the war will have significant effects on the world not only Egypt, but it At the same time, it must be emphasized that Egypt has a strong economy that enables it to absorb such expected repercussions from the war, and this is of course due to the wise political leadership.

He stressed that the danger may not be for Egypt at the time. The current season is significant, given the approaching season of local wheat supply from farmers, in addition to the stability of the strategic stock. It should be noted that the government decided, in light of the rise in global prices, to increase the price of local wheat supply to reach 275 pounds per ton during the season The harvest, which will start next April, and the impact of the crisis on Egyptian ports is weak, because trade between Egypt and Ukraine depends on imported goods. Dry casting, including wheat, for example

The Ministry of Supply said in a statement that it is not worried about a global decline in wheat stocks because it obtains it from a variety of suppliers, and Egypt’s strategic reserve of wheat is sufficient for about 5 months, taking into account the approach of the local supply season in mid-April.

As for the bright side of the crisis and its repercussions on Egypt, Samdouni expects that Egyptian ports specialized in transit activity will witness a boom during the current period. , especially that some shipping lines announced the start of trading Western European goods through Port Said ports temporarily, and it is noteworthy that most container ships will carry out transport work from the Asian market, so that their last stations will be the ports of the eastern Mediterranean, including the ports of Port Said and Damietta, which means that the East Port Said port He has an opportunity to increase the volume of trading, due to the availability of a draft of more than 49 meters, which enables the reception of large ships.