The International Forum was opened Fertilizers 47 in Cairo. The inauguration was attended by Dr. Mohamed Shaker, Minister of Electricity and Renewable Energy, Dr. Hisham Tawfiq, Minister of Business Sector, and Dr. Mohamed El-Taher Hawayen, President of the Arab Fertilizers Union, Dr. Sherif El-Gabaly, representative of the fertilizer industry in Egypt, and Engineer Raed El-Soub, Secretary-General of the Arab Fertilizers Union

Dr. Mohamed Shaker, Minister of Electricity and Renewable Energy, stated that a contract with A global consultant to develop a clear strategy for the production of hydrogen and ammonia, provided that the strategy ends no later than one year. , that the country has a current tendency to expand in green hydrogen and ammonia projects, explaining that work is currently underway on the production of the first 47 Mega Watt Ammonia before the COP Conference 28, so that the renewable energy generated by the state is supplied free of charge to these projects, and then recovered after the Operation.

He pointed out that there are talks and negotiations with about 7 new investors, to produce ammonia and hydrogen, depending on the opportunities available in the Egyptian market at present. 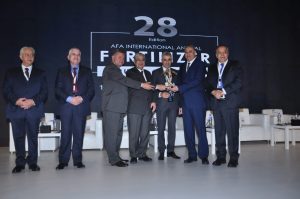 Continue that the country’s total production of renewable energies is currently close to mega watts, and it is expected to reach 10 thousands megawatts during 2023, provided that the production of alternative energies rise to about 42 % of the total electrical energy connected to the network by 8651.

clarified That the state supports the industrial sector with 50 piasters of the electricity supplied to the factories within the framework of the continuous support that The government has assigned him to the various factories, pointing to the current development at the level of electric power production, as well as the development that has taken place in the electricity transmission network.

Dr. Mohamed Shaker, Minister of Electricity and Renewable Energy, confirmed that there a plan that includes developing the controls of the distribution companies; To raise the level of performance and improve the quality of the electrical supply, a plan has been drawn up to establish and develop a control center in the electricity distribution networks up to 2023 in several stages distributed geographically throughout the Republic, which will monitor the electricity distribution network and improve its performance and will be able to meet the needs of population growth in the country, in addition to Requirements for industrial development.

Shaker indicated that the pilot project for installing smart meters and establishing data centers and communication methods for them has been completed, within the scope of 6 distribution companies (North Cairo, South Cairo In addition, one million smart meters will be installed in the project to improve energy efficiency in distribution companies (Alexandria, North Cairo, North Delta), in cooperation with the Japanese International Cooperation Agency (JICA) as part of the electricity sector plan to provide Electricity for all uses with a high degree of quality and raising the level of services provided to citizens. a The Holding Company for Chemical Industries is currently conducting a number of economic studies with a number of international partners to include green ammonia in the replacement and development projects in the Nasr, Delta and Kima factories. In its 47 session, that Egypt is one of the first producers of green ammonia in one Kima plant since the sixties of the last century, And it seeks to revive that industry by raising efficiency and reaching the best industrial practices in this field.

Tawfik indicated that Egypt has become the sixth largest producer and fifth largest exporter of urea in the world, explaining that the fertilizer industry It is divided into three types: nitrogen fertilizers, potassium fertilizers, and phosphate fertilizers.

He explained that two types of nitrogen fertilizers are produced in Egypt, and they are “urea” most commonly used in agriculture And “ammonia nitrate”, where ammonia is produced with a low concentration used in fertilizers and a higher concentration in multiple industrial uses.

He added: Egypt is the sixth largest producer and fifth largest exporter of urea, with its production reaching In 2023 about 6.7 million urea, its domestic consumption amounted to 2.9 million tons, while its export amounted to 3.8 million tons.

He continued: The local production of ammonia nitrate amounted to 1.1 million tons in a year 2020, and one million tons were consumed locally, and Egypt’s exports represented Of the fertilizers, about 9% of the total exports.

The meeting of Arab companies specialized in fertilizer production and shipping, noting that the fertilizer industry

We are all facing the Russian-Ukrainian crisis, so it is assumed that we, as countries like Sudan and Iraq, must have expanded plans for agricultural expansion, in such crises. Years

The other challenge is the high cost of production requirements and climatic changes necessitating a shift to green technology. Be during projects that limit this phenomenon simultaneously

He added that we contribute 30% of the nutrients

The necessity of exchanging fertilizers with African countries in return for obtaining food commodities depending on Exchange theory to raise food production rates in the region.

On his part, M. said. Raed Al-Soub, Secretary General of the Union, We

We balance oxidation with food and balance with green ammonia.

Challenges and opportunities in Africa.